After the Frenchman René Robert Cavelier, Sieur de La Salle missed the mouth of the Mississippi where he planned to establish a colony and landed instead in 1685 on the middle Texas coast, the Spanish Colonial government became concerned about the French encroaching on Spanish Texas.  The worry led to constructing missions in East Texas with the aim of Christianizing the Indians and establishing a buffer to keep the French in Louisiana from coming into Texas.  After years of little success in converting the Indians and finally moving all the missions out of East Texas, the Spanish Colonial authorities realized that securing control of the vast area required more than missions and a military presence—civilians were needed to populate the province of Texas.  By 1718 Mission San Antonio de Valero (present Alamo) and its presidio still lacked a civilian presence.

Originally the Spanish crown planned to move 400 families from the economically distressed Canary Islands off the northwest coast of Africa to establish a civilian community near the Mission San Antonio de Valero and its presidio.  The King of Spain intended to completely fund the move from the Canary Islands through Havana and on to Vera Cruz, including all the necessities for the journey.  However, after six years of planning, the original numbers were deemed too large and the transportation too expensive.  By the time the Islanders actually sailed for America in 1730, there were only twenty-five families, fifteen of whom stopped in Cuba and only ten traveled all the way to Vera Cruz on the Mexican coast. As they followed the route laid out for them by the Spanish government up through the center of Mexico, they 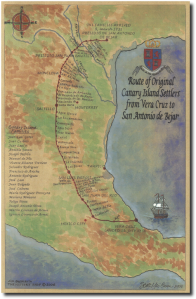 stopped at places like San Luis Potosi and Saltillo where they received food and clothing.  At Presidio San Juan Bautista on the Rio Grande they left their worn-out horses and continued their trek on foot to the banks of the San Antonio River. The journey of almost a year brought heartache, including deaths that left two widows as heads of large households and the three Cabrera children–Ana, José, and Marcos—whose parents died on the trip.  Marriages along the way increased the entourage to fifteen families—fifty-six people—reaching their new home on March 9, 1731.

Each family received generous land grants, including the three Cabrera orphans.  They named their pueblo “Villa de San Fernando” in honor of the prince, Don Fernando, who became King Ferdinand in 1746.  By August the Islanders, “Isleños,” had finished plowing and planting and had elected civilian officials to legally establish the first chartered civil government in Texas. Because of their position as the first civilian settlers, the Isleños had permission from the crown to carry the title of “hidalgo,” or son of noble lineage.  For years they represented the political and socioeconomic elite of the community.

Tensions arose between the three communities—the Isleños, the military in the presidio, and the Franciscans in the nearby missions—over access to water, which had to be delivered by acequias or irrigation canals, the use of the land, and the management of livestock.  As continued harassment from marauding Comanche, Apache, and other roving tribes made it difficult for farmers to work in their fields and sometimes even cut off communication with authorities in New Spain, the lines of differences began blurring between the groups and a cohesive community emerged as they banded together against the outside threat. 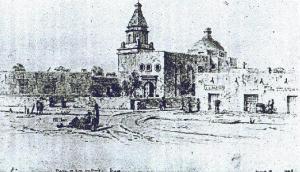 The Isleños laid the cornerstone in 1738 for the Church of San Fernando, the first parish church in Texas and completed its construction in 1750.  Over the years the church was enlarged and in 1874 Pope Pius IX named San Antonio a diocese with San Fernando as its cathedral.

The dome of the original San Fernando Church served as the geographic center of the city and the point from which all mileage was measured to San Antonio.  When Mission San Antonio de Valero (the Alamo) was secularized in 1793, its congregation became members of San Fernando.  Finally in 1824, after missions Concepcíon, San José, and Espada were all secularized, their members joined the San Fernando parish.  Jim Bowie married Ursula de Veramendi, daughter of the Governor of the State of Coahuila y Tejas at San Fernando in 1831.  The Battle of the Alamo began when General Santa Anna raised the flag of “no quarter” from the tower of the San Fernando church.  It is claimed that a sarcophagus or marble coffin at the back of the sanctuary holds the remains of Davy Crockett, William B. Travis, and Jim Bowie who died at the Alamo.  Today, the cathedral 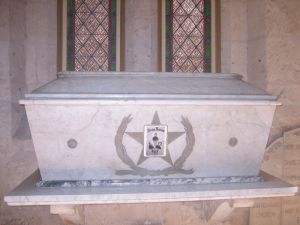 plays a major role in San Antonio as it continues to function as a religious institution while hosting symphonies, concerts, television specials, and the constant arrival of tour buses carrying visitors eager to see one of the oldest cathedrals in the United States that began as a parish church for Canary Islanders. 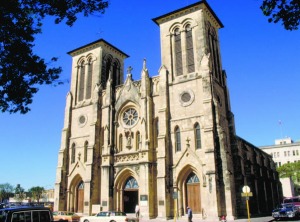