Josefa “Chapita” Rodriguez lived in a lean-to shack near an ancient road that crossed the Nueces River north of Corpus Christi. She offered meals and a cot on her front porch to travelers along the route. During the Civil War, the trail was known as the Cotton Road because the Confederacy used it to move cotton to Bagdad, a Mexican port at the mouth of the Rio Grande. The Confederacy exchanged the white gold with mostly British ships for guns, ammunition, and medical supplies.

Near the end of August 1863, employees at the nearby Welder Ranch found the body of John Savage stuffed in two burlap bags on the edge of the river. His head had been split with an ax.

A few days before the discovery, Savage had arrived late in the evening at Chapita’s cabin carrying $600 in gold in payment for his sale of horses to the Confederate Army in San Antonio. A large man who traveled heavily armed with six-shooters strapped to his leg, Savage frequently stayed at Chapita’s house.

Most of the records in the case burned in a courthouse fire, allowing rumors and legend to fill in the blanks. Since Chapita was too old (probably in her sixties) and too small to stuff the bulk of Savage into two bags and drag them down river, authorities pointed to Juan Silvera who may have been her illegitimate son.

The sheriff who arrested Chapita and Juan Silvera served as foreman of the grand jury and foreman of the jury that heard the charges at trial. At least three grand jury members also served as trial jurors, and members of both juries had been indicted on felony charges that were later dismissed. Chapita’s only defense was her repeating “not guilty.” A few days before the trial began, the gold was discovered downriver from where the body was found.

Despite the discovery of the gold, Chapita was found guilty as charged. The jury recommended mercy because of her age and the circumstantial evidence, but the trial judge Benjamin F. Neal sentenced her to be hanged. Juan Silvera was convicted of second-degree murder and sentenced to five years in prison.

Some accounts claim she was held for a time in the sheriff’s home; other stories say she waited in leg irons, chained to the courthouse wall in San Patricio. Children visited the courthouse, supplying Chapita with candy and corn shucks in which she rolled her cigarettes.

Many stories suggest Chapita’s silence was to protect her son Juan Silvera.  Whatever her reason, Chapita rode in a wagon to her fate while sitting atop her coffin and smoking a corn shuck cigarette. She stood to have the noose, dangling from a mesquite tree, placed around her neck. Local residents, many of whom believed her innocent, whispered among themselves that Chapita’s execution marked the end of San Patricio.

By the mid-1880s life began changing. The introduction of barbed wire closed the open range and the excitement of cattle drives through San Patricio came to an end. The railroad bypassed the town, the courthouse burned, and Sinton became the new seat of county government.

Despite Texas’ record number of executions, only three women have faced the gallows. Little information exists about the first woman legally executed other than she was a slave named Jane Elkins convicted of murdering a white man in Dallas County and hanged on May 27, 1853.

The third execution of a woman occurred in 1998 when Karla Faye Tucker died by lethal injection fourteen years after being convicted in a pickaxe murder.

On June 13, 1985, Governor Mark White signed a resolution passed by the Texas legislature to absolve Josefa “Chapita” Rodriguez of the murder for which she was hanged 122 years earlier on November 13, 1863. 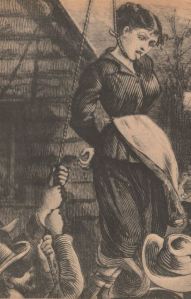