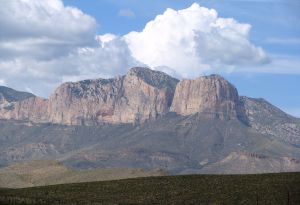 majestic Guadalupe Peak rising from the desert floor. The tallest mountain in Texas soars 8,751 feet above its western flank where an ancient salt flat sprawled across 2,000 acres. The salt and gypsum formed dunes that flowed from three-

Dunes in the Salt Flat

to sixty-feet above the desert landscape. This treasure, lying about 100 miles east of present El Paso, was so important for the region’s Native Americans that for centuries they viewed it as a sacred place where they secured salt for tanning hides, for use as a condiment, and as a preservative. Things began to change when the Spanish discovered the site in 1692 and the villages, such as San Elizario that developed along the Rio Grande near present El Paso, viewed the Salt Flats as common land to be used by all the peoples of the region. The Indians, especially the Apaches, did not welcome the intruders who defied Indian attack to gather the precious resource. Even after the 1848 Treaty of Guadalupe Hidalgo that ended Mexican-American War and drew Mexico’s boundary with Texas at the Rio Grande, the Tejano farmers and ranchers supplemented their meager incomes by selling the salt as far away as the rich mining regions in Northern Mexico where it was used in smelting the silver.

More problems arose after the Civil War when El Paso came under the control of prominent Republicans who tried to claim the Salt Flat and charge a fee for Mexican Americans to gather the salt that had been free for many generations. Meantime, Charles H. Howard, a Democrat, arrived in El Paso in 1872 with the intention of turning the Republican stronghold into a Democratic electorate. Howard was successful for a time, got himself appointed district attorney and worked against the Republicans and the “Anti-Salt Ring.” Then, Howard changed course, filed on the salt deposits in the name of his father-in-law, which infuriated the El Paso area Hispanics who felt besieged by the Republicans and the Democrats. When Howard had the sheriff arrest local Tejano men to keep them from collecting the salt, a group of enraged local citizens held Howard prisoner until he agreed to relinquish all rights to the salt deposits.

Eventually in frustration over the attempted control of their community and their economic future, the Tejano people of San Elizario, closed all the county government and replaced it with committees (community juntas). The Anglos, who numbered less than 100 out of a population of 5,000, called on the governor who sent a detachment of Texas Rangers. When the Rangers arrived in the company of Howard, a two-day siege occurred ending with the surrender of the Texas Rangers, the first time in its history that a company of Rangers surrendered to a mob. Howard and the ranger sergeant and two others were executed. The disarmed Rangers were sent out of town, the Tejano leaders fled to Mexico, and residents looted the buildings. Twelve people were killed and fifty were wounded. No one was ever charged with a crime.

San Elizario paid a hefty price for its demands: the county seat was removed to El Paso, the 9th Cavalry of Buffalo Soldiers re-established Fort Bliss to patrol the border and watch the local Mexican population, the railroad bypassed San Elizario, the population declined, and the Mexican Americans lost their political influence in the area.

By the 1930s, floods had deposited silt across much of the flats and salt gathering came to a halt. Today the ghost town of Salt Flats, which consists of a scattering of mostly deserted buildings, edges the highway. Scattered vegetation grows where silt covered the old salt beds, but barren white stretches still offer a glimpse of the precious early-day resource.