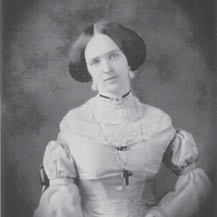 Lucy Pickens’  life was a contradiction—she was an outspoken, determined, and forceful woman who was ahead of her time, and she was a southern-belle, a beauty, and a charming hostess who was very much a part of her time.  She graced the stage of the Russian Czar and Czarina and the grand plantations of the South.  She sold her jewels to outfit a Confederate Army unit that bore her name, her image appeared on the Confederate one-dollar and the one hundred dollar bill, and she served as the first lady of the Confederate state of South Carolina.

Born in 1832 on the family plantation outside LaGrange in western Tennessee, Lucy Petway Holcombe may have been the second of five siblings, but her rare beauty, quick intelligence, and determination elevated her in the eyes of her very religious and indulgent mother, Eugenia Holcombe.  Lucy could do no wrong.  Her mother’s accounts in her diary described her daughter’s antics as precious childlike amusement, slightly frivolous, but   always adorable.  Lucy was named for her paternal grandmother, Lucy Maria, who claimed to be a distant relative of Marie Antoinette. Lucy clasped her connection to nobility and spent her life feeling slightly elevated and entitled to whatever was best for her.

Her early life on the remote plantation with only her siblings and slave children as companions did not deter Lucy’s insistence on getting her way.  Her first trip away from home occurred when she was eight and allowed to travel with her siblings to Kentucky to visit their governess’s family. Lucy missed her home and especially her mother. She whined and cried incessantly for days until the family gave up and placed her on a steamboat bound for Memphis.  Upon arrival, she rode fifty miles in a coach and then met a companion who accompanied her the rest of the way home on horseback.

Lucy and her older sister left the loving environment of their plantation home in 1846 for the formal rules and practices of a Moravian Seminary for Young Ladies in Bethlehem, Pennsylvania.  As Lucy would show in later years, she had learned from her mother to make the most of her situation, finding for the first time a larger society that admired her beauty, wit, and charm.

While the sisters were away at school, their father, Beverly Holcombe, made a series of bad investments, which forced the girls to leave school and the family to move to land outside Marshall, Texas.  Determined not to allow his family to forgo the luxuries to which they were accustomed, Beverly Holcombe managed to recoup some of his losses and build a grand brick mansion with white columns named Wyalucing. As a further show of wealth he constructed a second home, Westover, and created a street between the two houses that was lined with cabins for the slaves.

Despite her husband’s flair for displaying their wealth, Lucy’s mother, Eugenia, continued to stress her Christian ethic of hard-work and benevolence. She emphasized to her daughters that to whom much is given, much is required. Each day she made her rounds to the slave (she called them “servants”) quarters delivering liniment and salve.  She also made sure her servants owned Bibles and learned to read and write, a practice that was against the law and one she claimed in her diary did not sit well with other people in her community.

Lucy was eighteen years old when the family arrived in Texas, and she was determined to realize all her dreams for a fine life of wealth and prestige.  The manners and social skills learned in her youth, combined with her extraordinary beauty, perfect figure, and flowing auburn hair came together in a creature constantly surrounded with admiring suitors. Using her wit and charm, she managed to convince each admirer that he was special as she moved quickly into the important social circles that spread across the South.

Unknown until almost a century after her death, Lucy was also busy writing The Free Flag of Cuba or the Martyrdom of Lopez: A Tale of the Liberating Expedition of 1851, a novella published in 1855 under the pen name of H.M. Hardimann.  It was a romantic story 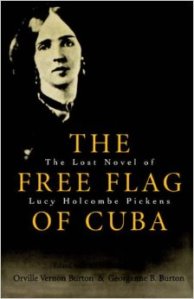 favoring the actual filibustering efforts of Gen. Narciso López to free Cuba from Spanish rule and establish a slave state on the island. The book encouraged the U.S. support for the cause, and the characters and situations they encountered paralleled Lucy’s own life. The men were brave, the women were lovely southern belles, and the slaves were happy servants. Some historians believe Lucy had been engaged to Lt. William Crittenden who was killed in the expedition and that the book was her reaction to her own lost love.

Very soon, however, another opportunity arose.  Lucy met South Carolina’s U.S. Congressman Francis Wilkinson Pickens, who was twenty-two years older than Lucy and had three children from two previous marriages.  Pickens fell immediately in love with Lucy and quickly asked her to marry him. Despite Pickens offering most of what Lucy was looking for—a man who was handsome, wealthy, respected and well established—she turned him down saying that if he had accepted the offer of the ambassadorship to England that his good friend, President Buchanan, had recently offered, she would have married him. Pickens hurried back to Washington to see if the offer was still open.  The position had been filled but Pickens agreed to become the Ambassador to Russia.  The couple married within a few weeks and began immediate preparations for the journey to St. Petersburg. Despite her determination to better herself and climb the social ladder, the letters that she sent to her family reveal a young woman experiencing terrible anxiety at the prospect of leaving home.  When she was the only one in her party who did not succumb to illness during the long sea voyage, she managed to ease her stress as she enjoyed the solicitations of the sailors on board ship.

Upon their arrival in the summer of 1858, they saw St. Petersburg’s marvelous architecture at its best.  Pickens’ position as the American Ambassador swept the couple into the upper echelons of Russian society.  Lucy’s knowledge of French and Russian, her elaborate wardrobe, and her willingness, despite the cultural shock, to learn the customs associated with her new lifestyle, soon made the Pickenses favorites at court. In her letters home she indicated that the manners of the aristocracy reminded her of those of the Southern planter class.  The friendship that developed between Lucy and Czar Alexander II and his wife the Czarina resulted in the 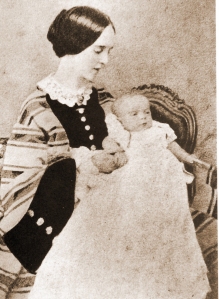 Lucy with Douschka in Russia

Czarina insisting when Lucy was expecting her first child that she move into the Imperial Palace to be waited on during the last stage of her pregnancy and be attended during the birth.

Upon the birth of the daughter, a formal salute was fired to announce it to the citizens of St. Petersburg.  The child was given a name that combined the southern family tradition and the Russian addition: Francis Eugenia Olga Neva Pickens with the added “Douschka,” which is Russian for “little darling.”

By 1860 Lucy longed to return to the South to raise her daughter, and Francis, concerned about the political turmoil stirring between the North and South, felt he needed to get back to South Carolina.  Thrust immediately into the upheaval, Pickens soon had to choose between his deep friendship with President Buchanan (who was soon replaced by President Lincoln) and loyalty to his state of South Carolina that was becoming the leader in the push for secession. As Pickens traveled across the state, he realized if he wanted to serve as governor, he would have to support secession.  On December 17, 1860, Francis Pickens was sworn in as South Carolina’s governor, and three days later the state became the first to secede from the Union without clear assurances that other southern states would follow.  Despite wanting desperately to return to her family in Texas, Lucy stood firmly behind her husband’s decision and saved her doubts for the letters she wrote to her family. In the following months thirteen other southern states followed South Carolina, and after a brief trip back to visit her family in Texas, Lucy recognized that she was the face of the southern cause and returned to her husband whose health was declining.

In keeping with her duties as the governor’s wife, she entertained lavishly at the governor’s mansion in Columbia and at the family plantation near Edgefield.  The Confederate elite were impressed and fascinated that even her servants were dressed in the finest Russian fashions.  She made a further gesture of grand support for the Confederate troops by publicly selling her exquisite jewels that had been gifts from the Russian Czar.  In a gesture of appreciation, Colonel P.F. Stevens of The Citadel in Charleston raised a legion composed of seven infantry companies and one cavalry; he named it the “Holcombe Legion.”  Becoming known as “Lady Lucy,” she adored the attention and frequently addressed the soldiers dressed in her finest attire.  She also presented the legion a flag she

designed that bore her name, the South Carolina palmetto, and the lone star that represented her Texas home.

As a further symbol of appreciation for the support of such a beautiful lady, the Confederacy placed her image on its one-dollar note in June 1862 and on its $100 note the following December.  At the end of his term in 1862, Pickens’ poor health forced him to return to Edgewood where Lucy continued to entertain.  With Pickens too weak to accompany her, Lucy traveled all over the South to show her support for the Confederacy.

After General Robert E. Lee surrendered, the life Lucy had always known came to an abrupt end.  Many of their slaves stayed as servants and just before Pickens passed away in 1869, he called the servants to whom he felt closest and asked them to watch over Lucy.  True to their former master, the servants served as pallbearers at Francis Pickens’ funeral.

Lucy’s brother came to help run the plantation, and her daughter Douschka, who was eighteen, helped manage some of the farms.  Douschka instituted a plan that may have been the first plantation to pay its laborers a bonus in addition to their salary when they helped produce a good crop.  After Douschka married and moved away, Lucy joined the Mount Vernon Ladies Association, which worked to preserve George Washington’s former home.  After Douschka died in 1894, Lucy lived another five years until August 8, 1899, when, at the age of 67, the Queen of the Confederacy passed away.

Queen of the Confederacy