“Charismatic, religious, smart-as-a-whip, trouble-maker”—descriptions applied to Martha McWhirter, who moved into Belton after the Civil War with her husband George and their twelve children. George opened a mercantile business, they built a large limestone house and the 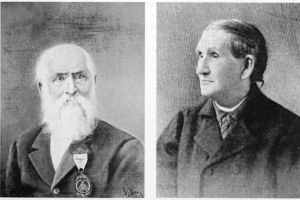 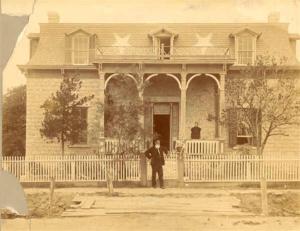 Martha organized a weekly women’s Bible study and prayer group. In August 1866, after two of her children and a brother died, Martha attended a revival and felt it had failed to offer comfort for her losses. Afterward, she reported to her Bible study group that she heard God speak and experienced a “Pentecostal baptism,” which may have included speaking in tongues. She believed she had been sanctified, set apart by God for a special purpose.

With the zeal of the newly converted, she emphasized the importance of dreams and revelations as the source of spiritual guidance rather than the sacraments and baptism. She encouraged the women in her Bible study to pray for sanctification and to share their dreams and revelations to arrive at a group consensus for their guidance.

The women prayed about trials of everyday life such as authoritarian husbands, dishonorable business dealings, drunkenness, and physical abuse. One of their early group decisions—the sanctified should not have sexual or social contact with the unsanctified—may have resulted from already having more children than they wanted. Whatever led to the decision, it spelled the beginning of some high-profile divorces and angry outbursts from townspeople. The new theology also resulted in the removal of five Baptists from their church rolls and several others being elbowed out of their denominations.

In addition to refusing to sleep with their husbands, the women refused monetary support except as payment for work. In the beginning, they sold eggs, butter, and hooked rugs. They placed the profit into a common pot, enabling them to help a sister whose husband denied her money for necessities. Later, they used their funds to hire a lawyer for divorce proceedings.

Distraught women came with their children to Martha’s house, escaping angry and often abusive husbands, filling the house beyond capacity. George McWhirter, believing in Martha’s sincerity, did not understand her behavior, but he never publically criticized her. Eventually, he moved into a room above his downtown store.

One woman inherited a large house, which they turned into a boarding house for lodging members and the public. Townspeople watched in amazement as wives of prominent men showed determination to make their way financially by taking in laundry, a chore traditionally relegated to black women of the community. Recognizing they were no longer accepted in polite society, the women took any work offering financial gain.  Two women chopped wood and delivered it to homes. Others worked as domestics, seamstresses, home nurses, and one became a cobbler.

Hard work paid off, and the group prospered, allowing members to rotate working four-hour shifts and take turns caring for and teaching their children.

The Sanctificationist code did not exclude men. In later years the women told an interviewer no man ever stayed with the group longer than nine months because “they want to boss, but they find they can’t.” In 1879, two young men from Scotland who belonged to a similar group at home, came to Belton seeking membership. It was one thing for the men of the town to put up with women being “Sancties,” but quite another for males to join. A group of men took the newly arrived gentlemen from their home at midnight and whipped them severely. When they still refused to leave town, they were declared insane in a district court hearing and sent to the State Lunatic Asylum in Austin. They were released very quickly, after agreeing never to return to Belton.

A hotel operator in nearby Waco hired some of the women in 1884 for one dollar a day and was so pleased with their industry, that he asked for more workers. Besides offering a good income, the women learned the hotel business. They opened the Central Hotel across from the 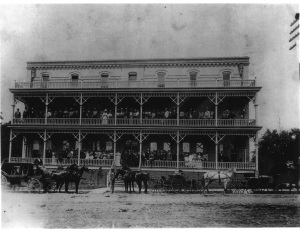 railroad depot. At first, townspeople boycotted the place, but after George McWhirter died, and it became obvious the hotel was the finest in town and offered the best food of any establishment, it became popular for locals.

The community’s attitude changed toward Martha. Maybe it began when she became a widow, no longer separated from her husband. Perhaps Martha’s donation of $500 to bring in the railroad spur or her contribution for building an opera house caused a change in the attitude of the community. She became the first woman to serve on the Belton Board of Trade—a precursor of the Chamber of Commerce.

Believing the women should see more of the world, Martha rented a house in the summer of 1880 near New York’s Central Park. She divided the members into three groups, each staying for six weeks. They traveled to the city by rail and returned by ship to Galveston. Martha estimated the total cost at $3,000.

By 1891, when the group incorporated as the Central Hotel Company, they owned several pieces of the local real estate, three farms providing food for hotel guests and feed for their livestock. Their net income reached $800 a month.

One of the women became a self-taught dentist charging only the cost of the material because she did not have a license. One member moved to New York, setting up a business selling pianos. By the 1890s, they traveled extensively to New York, San Francisco, and Mexico City, subscribed to many magazines, hired tutors for their children, and no longer held prayer meetings. They continued gathering, discussing dreams and arriving at group decisions. Although Martha served as the leader, the group operated on feelings and consensus, often sensing when something was wrong, and relying on dreams to tell them what to do. The answer might be selling one of the farms or encouraging a “disloyal” member to get married.

In 1899 the group decided to leave Belton for a locale with a more stimulating environment. Group consensus settled on Washington, D.C. as the best place for pursuing their cultural interests.

It’s unclear how much the group received from the sale and lease of their Belton property. Some estimates claim $200,000. They paid $23,000 cash for a house in Mount Pleasant, Maryland, and spent another $10,000 renovating the property.

Martha died in 1904 and contrary to predictions, the group of aging women continued living in the house until at least 1918. Another account says a daughter of one of the members lived there until 1983.

By the time the women settled in the Washington area, newspapers and magazines from around the country took note of the unusual group of religious women who wore no identifying habit, lived a Spartan existence, and made “A Happy Home Without Husbands.” 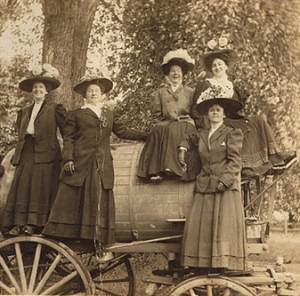