A Texas historical marker on FM 770, a few miles east of Saratoga in deep East Texas, credits Lancelot “Lance” Rosier with being one of the individuals responsible for the creation of the Big Thicket National Preserve, a sprawling wonderland of biodiversity so unique that UNESCO designated the region a Biosphere Reserve in 1981.

A self-taught naturalist, Lance Rosier was born and grew up in the heart of the Big Thicket. As a child he roamed the forest, grew familiar with every trail; he knew every baygall (shallow, stagnant water), and the name of every plant. An avid reader of botanical publications, he became the foremost authority on the flora of the Big Thicket.  Rosier served as a guide for Hal B. Parks and Victor L. Cory, botanists in the 1930s who authored the Biological Survey of the East Texas Big Thicket, the “Bible” of those wishing to preserve the area. 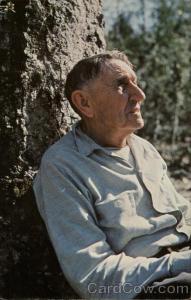 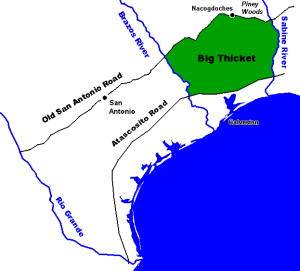 The Big Thicket has always presented a challenge to those who wanted to exploit its riches and to men like Rosier who worked to preserve its unique character. As early as the 17th Century, when Texas was part of the Spanish Colonial Empire, the forest of ninety-eight-foot longleaf pine trees measuring up to six feet in diameter towered over dense growths of six-foot palmetto trees, beech trees, fern, cacti, orchids, and carnivorous plants. The padres who established Spanish missions in East Texas traveled a route that circled north of the 3.5 million-acre swath of Southeast Texas that sprawled from near Nacogdoches to near present Beaumont.

Long before the Spanish arrived, mound-building Caddo Indians and other tribes from along the Gulf coast used the thicket for hunting deer, bear, panthers, and wolves.  At the end of the 18th Century, Alabama and Coushatta Indians migrated into the region and settled in the thicket in the 1830s.

Called “the thicket” because of the dense plant growth and cypress swamps, the region offered ideal hiding places for emigrants coming to Texas to escape legal problems such as bankruptcy and criminal charges in the United States. During the Civil War, when the Confederate government began conscription in 1862, men who did not want to join the army, men who did not own slaves and saw no reason to fight for big plantation owners, hid out in the thicket. They survived on the abundance of fish, small game, and wild berries. They set up secret locales where their families brought them coffee and tobacco in exchange for honey, wild game, and fish the families sold in nearby Beaumont.

Lance Rosier grew up listening to the stories about the thicket and the timber barons who began clear-cutting the forests in the mid-1800s and turned the region into a lumber bonanza after the railroad arrived in the 1880s. By the time Spindletop blew in south of Beaumont in 1901, the thicket had been reduced to about 300,000 acres and the oil industry brought more frantic development into the area.

After serving in the army in World War I, Rosier returned to his homeland and worked as a timber cruiser (someone who measures a plot of forest to estimate the quality and quantity of timber in that stand) and he led Big Thicket tours for anyone seeking his expertise including scientists, photographers, students, scholars, and conservationists. Rosier also led politicians such as Texas Governor Price Daniel and Speaker of the U.S. House Sam Rayburn as they explored possibilities of making the Big Thicket a Texas state park.

A shy and retiring little man, Rosier is said to have lent a sense of spiritual zeal to his quest to save the thicket. He cataloged hundreds of species of new plants and discovered plants that had been considered extinct. Rosier worked with the original East Texas Big Thicket Association that began in 1927 hoping to save the land and waterways. When that project met political headwinds, he led a new movement that became the Big Thicket Association in the early 1960s. 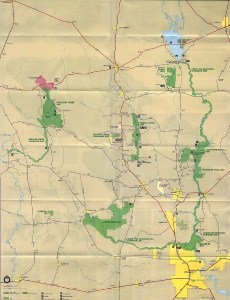 Lance Rosier died in 1970, four years before his dream came true. Congress passed a bill in 1974 to establish the first national preserves in this country––the 84,550-acre Big Thicket National Preserve and the Big Cypress National Preserve in Florida. The Big Thicket is a string of nine separate land units and several creek corridors. Today, the Lance Rosier Unit at 25,024 acres is the largest and most diversified preserve in the thicket. It encompasses the land where Rosier was born and roamed as a child.