Houston reigns as the largest city in Texas and the fourth largest in the United States, but it hasn’t always enjoyed top billing.

In 1832 brothers Augustus C. and John K. Allen came to Texas from New York and joined a group of land speculators.  During the 1836 Texas War for Independence from Mexico, the Allen brothers outfitted, at their own expense, a ship to guard the Texas coast and to deliver troops and supplies for the Texas army.  Their operation along the coast offered an opportunity to look for a good site for a protected deep-water port.

Some stories claim that after Texas won independence from Mexico in April 1836, the brothers tried to buy land at Texana, a thriving inland port at the headwaters of the Navidad River located between present Houston and Corpus Christi.  Despite a generous offer, the landowner countered with a demand for double the price.  One of the brothers reportedly became so angry that he climbed on a nearby stump and declared, “Never will this town amount to anything.  I curse it.  You people within the sound of my voice will live to see rabbits and other animals inhabiting its streets.”  (Today, Texana rests under an 11,000-acre lake, a recreational reservoir on the Navidad River that is part of Lake Texana State Park.) 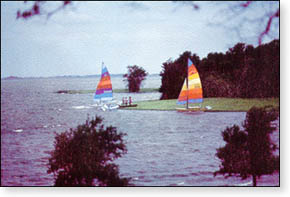 Soon, the Allen brothers discovered a site on the west bank of Buffalo Bayou, a muddy stream that wound its way for fifty miles to Galveston Bay and the Gulf of Mexico.  They purchased about 6,500 acres for $9,500 and wisely named the new town for Sam Houston, the hero of the Texas War for Independence and the future president of the republic.  By August 1836 the brothers placed newspaper ads claiming the new town was destined to be the “great interior commercial emporium of Texas.”  The ads also said that ships from New York and New Orleans could sail to the door of Houston and that the site on the Buffalo Bayou offered a healthy, cool sea breeze.  They did not mention the heat and humidity and that Buffalo Bayou was choked with tree branches and logs.

future port, sold town lots at a brisk rate, and generously donated property for churches and other public institutions. The first small steamship arrived in January 1837 after a fifteen-mile journey that took three days during which passengers helped clear logs and snags from the channel.  The travelers found a “port city” of twelve inhabitants and one log cabin.

The Allen’s slickest advertising ploy turned out to be their bid to get the government of the new Republic of Texas to relocate in Houston by offering to construct, at their own expense, a capitol and to provide buildings for public officials at a modest rental of $75 a month. It worked.  By the time the government moved to Houston in May 1837, the town boasted a whopping population of 1,500 and 100 houses.

When travelers arriving in Houston found food and accommodations in short supply, the Allen brothers opened their large home, free of charge.  Their accountant estimated the hospitality cost the Allen brothers about $3,000 a year, but the expense brought rich returns.

The brother’s deal to provide the capitol and all the official office space carried the stipulation that if the government moved from Houston, the property reverted to the Allen brothers.  In 1839 the Texas government moved again from the bogs along the coastal prairie to Waterloo, a tiny wilderness town on the edge of Comanche country in Central Texas that was renamed Austin.

With the loss of the capital, Houston plunged into financial turmoil that threatened to bankrupt the city.  Multiple yellow fever epidemics hurt the town’s image along with a growing reputation for drunkenness, dueling, brawling, and prostitution.  In the midst of it all Houston welcomed the Masons, Presbyterians and Episcopalians organized churches, and the town became the seat of county government.   Businessmen invested in the cotton trade, small steamboats ferried supplies to and from the thriving seaport at Galveston and enterprising merchants used ox wagons to haul goods to settlers in the interior and to return with cotton and other farm commodities. 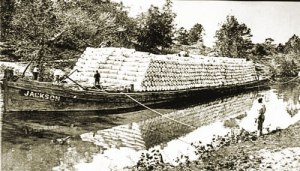 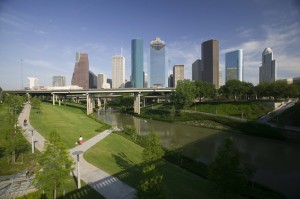