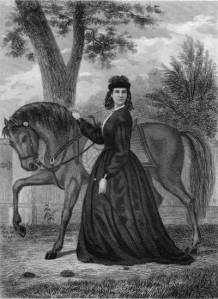 Born in 1841 as Sarah Emma Evelyn Edmondson, the future spy grew up as the youngest of five children on her family’s farm in New Brunswick, Canada. To please her father, who apparently wanted a son, Emma dressed and worked on the farm like a boy. When she faced an unwanted, arranged marriage in the late 1850s, she ran away from home, and changed her name to Edmonds. She dressed as a man when she reached the United States and began calling herself Frank Thompson as she traveled about the country selling Bibles.

With the outbreak of the Civil War, she continued her masquerade as Frank Thompson and enlisted in Company F, 2nd Michigan Infantry. Military records indicate that Private Thompson served as a nurse and regimental mail carrier. The 2nd Michigan saw its first battle at Blackburn’s Ford, Virginia. Emma worked as a nurse at Manassas and helped procure hospital supplies at the Battle of Yorktown.

Although the military record does not say Emma served as a spy, several notations of “absent on duty” coincide with her spy missions. In her first clandestine adventure, she put on a black wig, used silver nitrate to dye her skin black, and pretended to be an escaped slave employed on the earthworks at Yorktown where she identified a Confederate spy. At least twice she went behind Confederate lines “disguised” as a woman, including a time when she worked as a black laundress for the Confederates. On another occasion she dressed as an Irish peddler named Bridget O’Shea and sold apples and soap to Confederate soldiers. During one of the missions she began having “chills,” the first sign of the malaria that would grow steadily worse.

Emma saw plenty of action when the 2nd Michigan participated in the Battle of Williamsburg. She served as an orderly for a general in the Battle of Hanover Courthouse and in the Battle of Fair Oaks she observed the use of the Intrepid, a balloon that successfully reported Confederate troop movements. In the summer of 1862, while working as a regimental mail carrier, Emma made a round trip of about 100 miles, often sleeping on the side of the road. 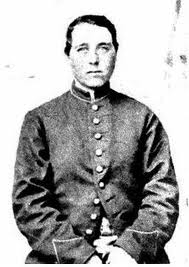 Several campaigns followed, including the battles of Antietam and Fredericksburg, before the 2nd Michigan moved to the Western theater of operations. By mid-April 1863, as the malaria grew worse, her request for a furlough was denied. Fearing discovery of her secret identity if she were hospitalized, she deserted.

She resumed life as a woman and worked as a female nurse for the United States Christian Commission. During this time she wrote her memoir Nurse and Spy in the Union Army, which captured the nation’s imagination, becoming a best seller at 175,000 copies. She donated the profits to soldiers’ aid organizations.

Emma married a fellow Canadian, Linus H. Seelye, in 1867, and after moving several times they settled with their five children in LaPorte, Texas.

For several years Emma gathered affidavits from 2nd Michigan veterans in an effort to clear the charge of desertion from the record of Franklin Thompson. Finally, on July 5, 1884, an Act of the 48th Congress granted Emma Edmonds Seelye, alias Franklin Thompson, an honorable discharge and allowed a pension of $12 a month.

The General George B. McClellan Post of the Grand Army of the Republic on April 22, 1897, invited Emma into its membership, the only woman known to be a member of a Civil War veteran’s organization.

Continuing bouts of malaria caused her health to deteriorate and on September 5, 1898, Emma Edmondson, Union Spy, died. On Memorial Day 1901, her body was moved to the Washington Cemetery in Houston and given military honors.