She came to Texas as the young wife of a powerful man, and the diary she kept of her travels and her life in the growing republic has captured historians and lovers of Texas history. Mary Ann Adams Maverick (1818-1898) was born on a plantation in Tuscaloosa County, Alabama. She attended a nearby boarding school and when she was eighteen, she met thirty-three-year-old Samuel Maverick––a Yale-educated lawyer who had just returned from the Texas war for independence. His plans to sell some of his property in Alabama and hurry back to land speculation in Texas got delayed when he met Mary. They married within three months.

Mary and Samuel Maverick did not get to San Antonio until June 1838 and by then Mary had given birth to the first of their ten children. Samuel knew San Antonio well, for he had gone there in the fall of 1835 with plans to start building a land empire. Instead, he was thrust into the developing Texas Revolution. Mexican officials placed him under house arrest for a time and when he was released he went to the Texan force gathered south of the city and urged them to continue their siege of San Antonio de Bexar. He kept a detailed diary of the events as the Texans defeated the Mexican garrison and took over the town. He stayed in San Antonio and after Santa Anna’s army arrived on February 23, Maverick was elected as a delegate to the Texas Independence Convention in Washington-on-the Brazos. He made it through the Mexican Army lines on March 2 and reached the convention in time to be one of the signers of the Texas Declaration of Independence.  By the time the convention ended, the Alamo had fallen and Texans were fleeing east ahead of Santa Anna’s advancing army. Suffering from chills and fever, Maverick made it to Nacogdoches where he remained until after Texas won independence at San Jacinto on April 21, 1836.

Soon after the Mavericks reached San Antonio, Mary gave birth to their second son. That same year, she also used ink and watercolors on paper to produce the oldest known image of the church, which we know today as the Alamo and the Convento, which had served as

Alamo and Convento, ink and watercolor drawing of Mary Maverick.

the quarters used by the priests when the old structure was a mission. And Samuel set the pattern that he kept for the rest of his life. He made forty-one land purchases, moved the family into a house on the northeast corner of 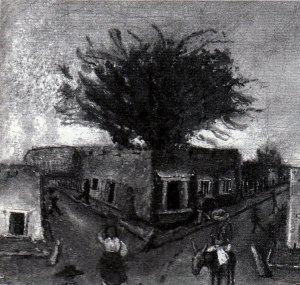 Maverick home on the northeast corner of the Main Plaza.

the Main Plaza, and entered politics as mayor of San Antonio.

The following year, Mary wrote in her diary that March 19, 1840, was “a day of horrors.” Comanches had come to San Antonio seeking a treaty to draw boundaries that would halt western settlement into Comancheria. Texan authorities had demanded that the Indians bring in all their white prisoners. When they arrived with only Matilda Lockhart, a sixteen-year-old girl who had been a captive for over eighteen months, the Texans announced that the Indians would be held as prisoners until all the captives were returned.

Mary Maverick and a neighbor who lived nearby heard the gunfire and watched from behind a fence the battle that spilled into the plaza. When the terror ended, thirty-three Comanches lay dead and thirty-three were taken prisoner. Six Texans and one Mexican also perished.

Mary’s memoir, published in 1895, offers an account of the Council House Fight that historians reported for years. She claimed that the Texans were horrified to discover that Matilda Lockhart had been raped, had burns all over her body, and her nose had been burned away. However, later research revealed that Matilda Lockhart’s sister-in-law who was in San Antonio at the time wrote a letter to her mother and did not mention any injuries. In Col. Hugh McLeon’s report of March 20, 1840, he commented about Matilda’s intelligence but said nothing about a missing nose. Since the memoir was not published until many years later, it may have been an effort to justify the Texans rage.

Within two days of the Council House Fight, Samuel Maverick left for South Carolina and Alabama where he sold some of his property and purchased two-year’s worth of provisions. He had the supplies shipped to Linville, the seaport on Lavaca Bay.

Meantime, the Comanches who had been taken prisoner in San Antonio escaped, returned to Comancheria to grieve their losses and plot revenge. The following August, a party of about 1,000 warriors and their families swept across Texas in what became known as the Great Raid of 1840. They attacked Victoria, stole several hundred horses, and sacked the seaport village of Linnville. While terrified residents sat in boats in the shallow bay, they watched the town burn and all the warehouses destroyed. Among the losses, were Samuel Maverick’s supplies waiting to be shipped on to San Antonio.

Mexico had never accepted Texas independence and had made several forays across the border. In 1842, while Samuel Maverick served as San Antonio treasurer, word arrived that Mexican forces were headed toward the city. The Mavericks joined families fleeing the advancing troops in what was known as the “Runaway of ’42.” They stayed for a time in an abandoned house near Gonzales and then Maverick moved the family to LaGrange to get them farther away from the Indian threat. He had returned to San Antonio to argue a case before the district court when the Mexicans captured the city and marched many prisoners, including Maverick, to Perot Prison in the Mexican state of Vera Cruz.

When Mary heard of her husband’s capture, she gave money to one of her slaves to use for ransom and sent him with her Uncle John Bradley and another company to free her husband.  Mexicans surprised the little group, the slave was killed, and her uncle was taken to the prison with Maverick. They were not released until April 1843.

While he was in prison, Samuel Maverick was elected senator in the Congress of the Republic of Texas. He served in the last session and was a strong advocate for Texas annexation to the United States. During the time he served in the Texas Senate, Mary and the children lived in a log cabin near LaGrange on the Colorado River.  Believing the site caused some of their illnesses, in late 1844 Maverick moved his growing family to Decrows Point on Matagorda Peninsula. During that time, a farmer repaid his debt to Maverick with 400 head of cattle. Samuel had no interest in ranching and turned the management over to some of his slaves who did not bother to brand the calves. Finally, Maverick moved the cattle and the slaves to a ranch south of San Antonio. Still, the cattle roamed unbranded and neighbors began referring to the unmarked beeves as Maverick’s. Over time, that moniker stuck, and by the end of the Civil War when so many unbranded cattle roamed the Texas countryside, they were called “Mavericks.” 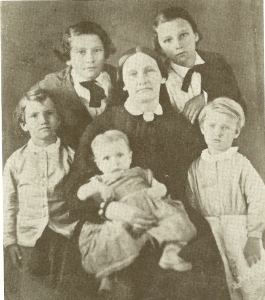 Mary Maverick and five of her children.

Violence was not the only hardship faced by those early Texas settlers. When they finally moved into a new home across from the Alamo, their seven-year-old daughter Agatha died from a fever. Over the next two years, cholera took 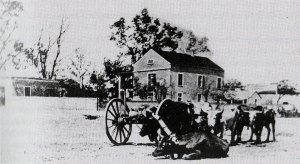 both Augusta then John Hays. Ironically, the child named for their friend the legendary Texas Ranger John Coffee Hays died the year that his father traveled with Coffee on an expedition to chart a route from San Antonio to El Paso. Maverick’s task was to document the trip. Finally, their youngest a girl of about eighteen months died in 1857.

After the Mavericks returned to San Antonio, Samuel expanded his West Texas landholdings from almost 140,000 acres in 1851 to over 300,000 acres at the time of his death in 1870. He served in the state legislatures from 1851-1863, where he worked for equal opportunity for his Mexican and German constituents. He fought for liberal land acquisition laws and for a fair and efficient judicial system.

He opposed secession, but when the conflict became inevitable, he supported the Confederacy. Four of their sons served in the Confederacy and Mary worked in the relief effort in San Antonio. A devout Episcopalian, she helped establish St. Mark’s Church and served for over twenty years as president of the Ladies’ Parish Aid Society.

With the help of her son George Madison Maverick, Mary shaped her diaries into her memoir and published a few copies in 1895.  She served as a member of the San Antonio Historical Society and of the Daughters of the Republic of Texas. As president for many years of the Alamo Monument Association, she kept the public aware of the need to restore the decaying site, even writing a brief account of the fall of the Alamo. Mary Maverick and her many descendants have worked to preserve San Antonio and the memory of the pioneer men and women who shaped the future of Texas.