The 159-year-old Menger Hotel is the grand dame of San Antonio’s Alamo Plaza, thanks to the hard work of two young immigrants William and Mary Menger. William was one of those younger sons in Germany who didn’t inherit so he became a cooper, making casks and

barrels for beer and wine. The twenty-year-old sailed for the United States in 1847 and arrived in San Antonio about 1850. He took a room in a boardinghouse run by Mary Guenther because the young widow spoke German and she was a fine cook and housekeeper.

Mary and her mother emigrated from Hanover in 1846. Soon after they reached San Antonio, her mother died, and Mary was robbed of all her money. She worked for an American family until she married Emil Guenther in 1848. Together, they operated a boarding house, but within the first year of marriage, Emil and their infant baby died, leaving Mary alone again.

Mary’s new border, William Menger found that his cooperage skills served him well because barrels were in demand for shipping and storing everything from coffee to crackers, molasses to bacon and flour. The following year, although she was eleven years his senior, William and Mary decided to marry.

William was Lutheran, but in deference to Mary’s Catholic faith, he hired a horse to go thirty miles west to Castroville to bring his friend Rev. Claude Dubuis (future Bishop of the Galveston Diocese) to perform the nuptials. When the priest arrived, William apologized for the horse that was obviously a broken-down old nag. The priest said, “I’m glad you didn’t send a better horse or Indians along the way would have killed me to get my horse.”

William helped with the boardinghouse, continued with his cooperage business, and over the next nine years, they had four children, three of whom lived to adulthood. In 1855, William decided to stop making the barrels and concentrate on filling them. He hired a German master brewer and constructed the Western Brewery east of Alamo Plaza. He selected the site for two reasons: its access to the spring waters of the Alamo Madre Acequia or irrigation ditch. The waters cooled his thick-walled underground cellar and chilled the lager beers. And the locale sat next door to the U.S. Army’s Quartermaster Depot, providing a clientele of officers and soldiers.

The Mengers also built a larger boardinghouse nearby. They solved the problem of it being across the San Antonio River from the primary commercial centers of the Main and the Military plazas by offering carriage rides for boarders and diners in the boardinghouse restaurant. Of course, the guests enjoyed the brewery.

Apparently, the high-quality beer and fine restaurant grew the business, because within two years the Mengers hired a Prussian born builder J.H. Kampmann to construct a two-story limestone (from the quarry that created the current Sunken Gardens) hotel on the boardinghouse site. The Menger Hotel opened on February 1, 1859, with tours of the rooms, a reception, and positive reviews even in the national press. By the third night, the hotel was fully booked with army officers, their families, and traveling merchants. 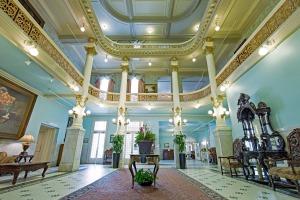 Almost immediately, plans began to add a forty-room annex with a tunnel connecting to the brewery. Since the railroad would not arrive until 1877, the Menger offered fine stables for the convenience of their guests.

The Menger family and many of their employees who were German immigrants lived in the hotel, along with about twenty-four hotel guests. The restaurant under the direction of Mary took advantage of German farmers for fresh fruits and vegetables that were not common to Anglo-Americans. She broadened the meat selection to include venison, wild turkey, quail, bear meat, buffalo, and turtles from the San Antonio River. William raised and butchered his own hogs for bacon, ham, and sausage. They imported specialty items such as tea, cod fish, seasonal cranberries, sultana raisins, English currents, and stuffed olives. Eager to make the hotel more than a local attraction, Menger brought in champagne, wine, claret, sherry, and whiskey. The hostelry was famous for its ice shipped from Boston through the port at Indianola and hauled to San Antonio on special wagons. It cost extra if a guest wanted ice in their whiskey.

The Menger served as a center for social and civic organizations. In the approach to and during the Civil War, the hotel accommodated political groups where speeches were held and parades gathered in front of the building. Despite the Union blockade of the Gulf ports, Confederate officers stayed at the hotel, and Menger acquired food through his connections in the West and South for shipments from the neutral Mexican ports.

By 1867, the city was still ten years away from getting a railroad that would connect with Texas ports, and the Army was looking for a better location. Menger quickly built facilities following Army specifications, which included a large warehouse and two cisterns, next to the hotel. He then leased the buildings to the federal government at a low rate. The Army used the facilities until Fort Sam Houston was opened in 1877.

The Mengers traveled to Germany and Paris in 1867 to purchase furniture for the hotel. Upon their return, William saw a Silsby Rotary Engine used for firefighting in New York. He had founded and led the Alamo Fire Association Number Two before the war. He immediately paid $4,000 for the equipment and had it shipped at a cost of $900 to Indianola and then by ox wagon to San Antonio, giving his city the first steam engine in Texas.

William Menger died unexpectedly at the age of forty-five in 1871, leaving Mary and their eldest son Louis to successfully maintain the high standards of the hotel. Mary bought more land to expand the hotel and added modern gaslights. Illustrious guests continued to frequent the hotel. When President Ulysses Grant visited in 1880 the menu for his reception was printed in French.

With the arrival of the railroad in 1877, national beer companies moved in to compete with the Western Brewery. Mary and Louis Menger closed the brewery the following year and used its space to build a three-story, L-shaped addition, which added one hundred rooms. In 1881 Mary and Louis Menger sold the hotel and property for $228,500 and the furniture for $8,500 (about $2.8 million today) to the original builder, J.H. Kampmann.

The Menger continued to prosper, underwent several major restorations and was placed on the National Register of Historic Places in 1976. It is a member of the Historic Hotels of America. 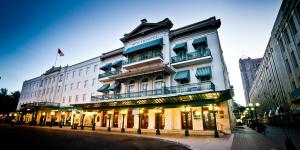