Travelers heading northwest on US 90 out of Del Rio parallel the Rio Grande through arid canyon lands carved by the intersecting Pecos and Devils rivers, one of the most significant archeological regions in North 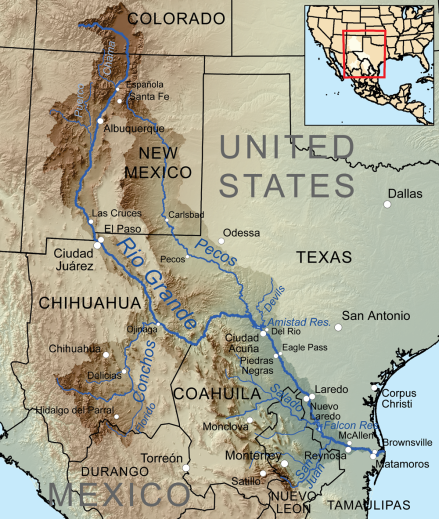 America. Tucked into overhanging limestone ledges and deeply recessed caves are rock shelters where evidence of human habitation dates back about 10,000 years. Over 300 paintings, sprawled across the limestone walls of these hidden rock shelters, created between 3000 and 4000 years ago, are among the world’s finest pictographs (drawn or painted images) and the largest collection in North America. Some of the multi-colored scenes, painted and drawn by hunters-gatherers who called the canyons home, spread more than 100 feet and depict characters twenty feet tall. The oldest images, known as Pecos River style, are the most common and often feature 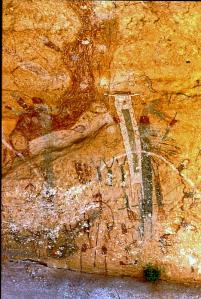 shaman rituals representing journeys to the spirit world. Some of the shamans are painted to look like they are ascending; others appear to be hovering with protective out-stretched arms. Panthers with great long tails leap across the limestone canvass and splay fierce claws among 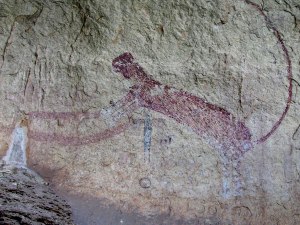 The only large array of petroglyphs (images carved, pecked, or cut into stone), hundreds of geometric and abstract designs created about the year 1000, have been discovered on gently sloping bedrock on private property. Work continues to remove sediment revealing older, more graceful techniques, including motifs of atlatls (spear throwers that pre-date the bow-and-arrow) as well as animal tracks and human footprints. 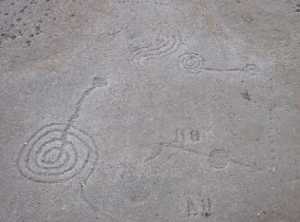 The artistic styles evolved slowly over time among these isolated people living in a small region with no influence from outside forces until about 1600 to 1800 when Spanish explorers and Plains Indians began to make forays into the region, bringing disease and warfare. Depicting the changes brought by the intrusion, the art first shows the novelty of domestic livestock and the curiosity of a people who wore little clothing upon seeing hats, boots, weapons, and the armored horse. Although no missions were established in the Lower Pecos, structures appear similar to missions topped with a Christian cross. Then the destructive consequences of diseases, warfare, and starvation created by the outside invasion appear in scenes of soldiers, horsemen, and destroyed churches. 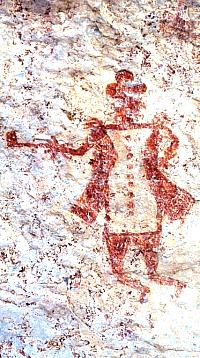 Pictograph of European Man Photo from ANRA-NPS Archives at TARL

The introduction of the horse culture among the indigenous people seems to explain the appearance of the more recent art in canyons near water supplies and access to grazing areas away from the steep cliff sides of earlier pictographs. The scenes depict hand-to-hand combat, horse theft, thunderbirds and sun symbols.

Since the 1920s researchers ranging across all the disciplines have been studying the art and the lifestyle of the ancient canyon-dwellers who for thousands of years did not cultivate crops, but sustained their livelihood by hunting and gathering. Although more than 250 sites in Texas are known for prehistoric pictographs, only the Lower Pecos Canyonlands exhibit a rock-art tradition of a single group of people over an extended period of time.

For centuries the arid environment preserved the wall art as well as the grass beds, baskets, mats, string bags, and sandals made from fibers of native plants such as lechuguilla, sotol, and agave—priceless evidence of the culture of the prehistoric era. However, modern treasure hunters began destroying and defacing the art, and it was not until the 1930s that archeological expeditions began collecting the materials primarily for display in museums. Serious archeological research and efforts to protect the site began in the late 1950s when Mexico and the United States made plans to construct the huge Amistad Dam at the confluence of the Devils River and the Rio Grande in the core of the Lower Pecos Canyonlands. When the dam was completed in 1969, its reservoir spread over 89,000 acres, covering much of the prehistoric treasures. 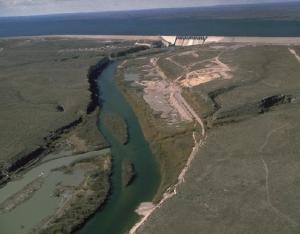