More than a month after General Robert E. Lee surrendered at Appomattox (April 9, 1865), the Last Land Battle of the American Civil War occurred at Pamito Ranch a few miles below Brownsville.

Bagdad Port on the Mexican side of the Rio Grande

Tensions ran high all along the lower Rio Grande because Confederates depended on hauling cotton from throughout Texas across the river to hundreds of European ships anchored offshore at the neutral Mexican port of Bagdad. The cotton was lightered in small vessels to awaiting ships in exchange for Winchester rifles, ammunition, and desperately needed medical supplies. 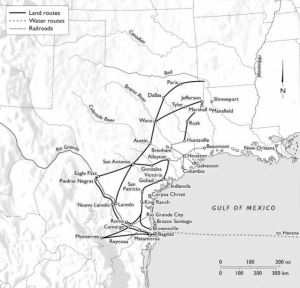 Cotton Roads to the Rio Grade

Union forces had briefly occupied Brownsville, which forced the cotton wagons to travel upriver to Laredo or Eagle Pass and then haul their valuable cargo back down the Mexican side to the port at the mouth of the Rio Grande. When the Confederates regained control of Brownsville, federal troops withdrew to Brazos Island on the United States side of the river where they continued to enforce the coastal embargo. 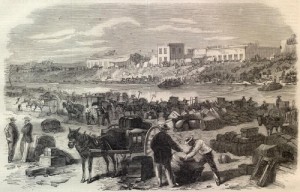 Cotton ferried from Brownsville to Matamoros waiting for shipment along the river to Bagdad.

In March 1865, believing the Union had won the war, Lt. Gen. Ulysses S. Grant gave permission for Maj. Gen. Lewis Wallace to meet Confederate commanders of the Brownsville area in hopes of securing a separate peace agreement. The Union terms offered at the meeting on March 11th required Confederates to take an oath of allegiance to the United States; stated that there would be no retaliation against the troops; and said those who wished to leave the country would be allowed to do so. When the Union’s proposal went up the Confederate chain of command, not only did Maj. Gen. John G. Walker denounce the terms, he wrote an angry letter to his subordinates for even agreeing to meet with the Union. As late as May 9th the commander of the Confederate Trans-Mississippi Department, Lt. Gen. Edmund Kirby Smith told a gathering of governors of the Confederate states west of the Mississippi that despite Lee’s surrender he proposed continuing the fight.

Meantime, a passenger on a steamer heading up the river to Brownsville tossed a copy of the New Orleans Times to Confederates along the Rio Grande. It was May 1st and the newspaper bought the news of Lee’s surrender and Lincoln’s assassination. In the next few days, several hundred rebels headed home, but those who remained were as determined as their leaders to continue the fight.

When the Union commander on Brazos Island received a false report that the Confederates were abandoning Brownsville, he sent 300 men to the mainland with instructions to occupy Brownsville. Confederates got word of the advance on May 12th and met the federals for a brief skirmish at Palmito Ranch twelve miles down the river from Brownsville. Both sides sent for reinforcements, but the following day the Confederates were supplied with mounted cavalry and a six-gun battery of field artillery. The federal increase in infantry to 500 was no match for the rebels. Within four hours the Union troops retreated seven miles back to Brazos Island.  At that point, Confederate Col. John Salmon “Rip” Ford commander of the southern division is quoted as saying, “Boys, we have done finely. We will let well enough alone and retire.” Ford wrote in his report of the battle that it had been “a run” and the clash showed “how fast demoralized men could get over ground.” The accounts differ on the number of loses, from a handful to a few dozen Confederates wounded, while the Union had from sixteen to thirty killed and wounded.

At the same time the Battle of Palmito Ranch raged, governors of the Confederate States of Arkansas, Louisiana, Missouri, and Texas were instructing Lt. Gen. Edmund Kirby Smith to dismiss his armies and end the war. Within days, Federal officers from Brazos Island moved into Brownsville to arrange a truce with the Confederates.