A discovery forty miles north of Austin, known as the Gault Site, tells the story of hunters 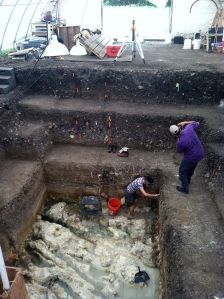 and gatherers who lived 16,000 to 20,000 years ago, which makes them older than the Clovis People thought to have been the first in the New World. The Gault Site offered a perfect locale in a wooded valley near several springs feeding a creek where limestone outcrops provided high-quality flint (chert) for use in tool-making. The rich soil and abundant animal life made the area an ideal living environment.

For decades, the family that owned the land allowed treasure hunters to dig for a fee. Texas’ first professional archaeologist J. E. Pearce excavated part of the site in 1929-30 and reported it was one of the largest Clovis sites in Texas. However, paid digging continued even after 1991 when test excavations disclosed extensive evidence of older occupation. Although researchers were analyzing and cataloging the artifacts, it was 2007 before a private individual purchased the land. He donated fifty-four acres to the Archaeological Conservancy, a nonprofit that protects sites nationwide, and he gave the balance of the land to the Gault School of Archaeological Research at Texas State University in San Marcos.

Archaeologists dug a test pit below the 13,000-year-old Clovis occupation through thirty centimeters of sediment to find this unknown civilization. To determine the age of the stone artifacts, they used optically stimulated luminescence, which determines when particles of quartz and feldspar in soil samples around the artifacts were last exposed to sunlight.

Touted as one of the most important Paleo-Indian archaeological discoveries, the project has yielded 2.6 million projectile points, tools, flakes, and other artifacts. It is fortunate that the earlier pay-to-dig amateurs did not go deeper. The treasures included almost 200 stones carved with grids, spirals, and designs with perfect parallel lines and herringbone

Gault Stone with parallel lines cutting across at different angles.

patterns thought to be the oldest art in the Americas They found a stone floor (possibly the earliest known house) with “toss piles” of flint or chert to the northeast and large animal bones to the southwest (upwind from the smell of rotting flesh). Apparently, just like modern campers, these people kept their site clean and tossed their trash off to the side.

The abundance of tools and weapons indicates that this was a huge manufacturing area that attracted people over a long period. There is also evidence of leather-working such a hide-scrapers, and tools to cut and work or punch hide.

Clark Wernecke, an adjunct professor at Texas State and director of Gault School of Archaeological Research said that researchers who study these artifacts cringe when they hear someone call these ancient people “a primitive culture.” He reminds us that these folks invented tools that we are still using today.