A group of German noblemen known as the Adelsverein, promoted the huge wave of German immigrants that began landing on Matagorda Bay in 1844. Some of the early arrivals remained on that barren strip of shell beach and established a port that became Indianola. 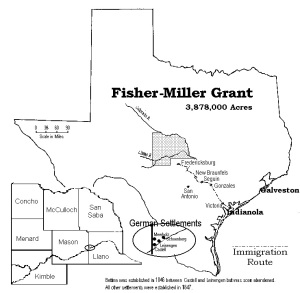 Most of the emigrants moved inland and created settlements such as New Braunfels and then Fredericksburg.

Germans continued to arrive by the shiploads and in early 1847, Dr. Ferdinand von Herff and Hermann Spiess organized a group of idealistic young university students calling themselves Die Vierziger––“The Forty,” who dreamed of a utopian community, a socialistic colony. When one of the founders of the Verein heard of the Forty, he offered $12,000 in cash, tools, livestock, wagons and provision for one year if they agreed to be the first settlers in the remote Fisher-Miller grant north of Fredericksburg.

By the time the cultured and wealthy young men reached Galveston, their numbers had dwindled to thirty-one, plus a young woman named Julie Herf (unrelated to Dr. Herff) whom they hired for her housekeeping skills and her fluent English. When the exuberant party reached Indian Point (it had not yet been named Indianola), they had so much baggage and freight, that they had to wait for additional wagons to carry such things as machinery for constructing a mill, a kennel full of dogs, and many barrels of whiskey. One of the young men wrote that they “lived like gods on Olympus. . .sang, drank, and enjoyed themselves” all the way to New Braunfels. Their trip further north to a site near to a site near present Castell, took longer than expected because they were trying for the first time in their lives to drive a herd of cattle to their new home on the north side of the Llano River.

Immediately they set about transforming the wilderness into Bettina, the idealistic community named for Bettina von Arnim, the writer and muse to the Prussian socialist movement.

They erected white tents and a barracks made of posts and beams covered with grass. Julie Herf had a lean-to kitchen on the side of the barracks where she provided steaming pots of food to sound of the “vigorous songs of hearty workers.”

Among the happy throng of eager laborers were seven lawyers, two architects, a musical instrument maker, a hotel keeper, a brewer, and a theologian. There was also the necessary miller, blacksmith, butcher and a few mechanics and carpenters.

Dr. Herff began learning the dialect of their Comanche and Apache neighbors who had recently made a lasting peace treaty with the residents of Fredericksburg. He had been treating the Comanches who showed up at Bettina for various ailments for a short time when one of the natives arrived with advanced cataracts. Although Herff had performed cataract surgeries in Germany, operating on eyes in the wilderness was another proposition. Fearful the Comanches would not understand his refusal, he decided to meet the challenge. He had brought the latest in ophthalmologic instruments, but he needed good lighting for the delicate surgery. Ether was the only anesthetic available, but it was highly flammable, which ruled out using candles or kerosene lamps because the flames had to be held close to use his magnifying lenses. Herff solved the problem by performing the surgery outdoors under bright sunshine. He was not concerned about infection because infection was unknown at the time. However, he was a very clean man and he insisted the area be dust free, no wind, and free of bugs. On the prescribed sunny day, a dozen members of the Forty stood around the operating table and kept away insects by waving palm leaf fans.

Aware that free flowing tears kept the eye clean, Herff reasoned that irrigating the eyes with water would serve that purpose. He later wrote that he used his 160-power microscope to view the cistern water and realized it was “infested with numerous small moving bodies which I called animalcules, [so] I decided to clear the substance by boiling it.”

The surgery was a success and the Comanche thanked the doctor profusely, promising to bring him a gift––a woman. Sure enough, three months later, the Indian brought Herff a teenage Mexican girl.  The cook/housekeeper Julie Herf took the girl, named Lena, under her

wing, and apparently life turned out well, for Lena eventually married Hermann Spiess, one of the founders of the Forty, and they had ten children.

Bettina, however, didn’t fare so well. Herff and another of the leaders, returned to Germany to marry. In their absence, the communal spirit that trusted everyone to work when he felt like it, resulted in most of the Forty not working. The heavy dominance of professional men who saw themselves as directors of others instead of workers, led to the laborers feeling the injustice and refusing to carry the load. By the summer of 1848, the settlement was abandoned.

Some of the young men moved to other German freethinker communities such as Sisterdale and Comfort; other spread out across the Hill Country to establish careers as lawyers, ranchers, merchants, and writers.

Ferdinand Herff returned to San Antonio with his German bride, and because he believed that professional satisfaction was its own reward, he served mostly indigent patients. He continued to perform remarkable medical surgeries such as removal of two large bladder stones from a Texas Ranger. This was Herff”s first time to use chloroform and he operated before a large crowd, including William (Big Foot) Wallace. He continued to perform cataract removals; corrected a depressed skull fracture to alleviate traumatic epilepsy; and opened a young man’s stomach who had swallowed lye. At the age of eighty-four, he operated at a remote ranch on his daughter-in-law for an ectopic (fetus outside the uterus) pregnancy.

11 thoughts on “GERMANS IN THE TEXAS WILDERNESS”