African American children in the South attended segregated schools that were dilapidated.

They used castoff books from white schools. At times they attended classes in churches and lodge halls because the local school board did not provide buildings for black

students. Two men worked to change all that. Booker T. Washington, founder of Tuskegee Institute and Julius Rosenwald, a Chicago philanthropist instituted a program that eventually built 527 schools in Texas and almost 5,000 across the South.

Julius Rosenwald, son of German-Jewish immigrants, became part owner in Sears, Roebuck & Company in 1895, and from 1908 until 1925 he served as president. As he wealth grew he increased his giving, especially to educational and religious institutions. His 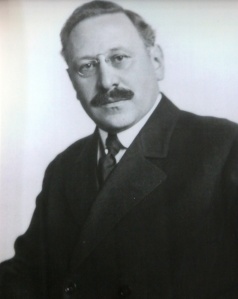 friendship and work with other philanthropists such as Paul J. Sachs of Goldman Sachs led to Rosenwald meeting Booker T. Washington. 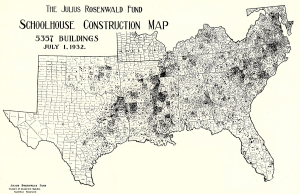 In 1911, Rosenwald wrote: “The horrors that are due to race prejudice come home to the Jew more forcefully than to others of the white race, on account of the centuries of persecution which we have suffered and still suffer.” After Rosenwald gave Tuskegee Institute $25,000 for a black teacher-training program in 1912, Booker T. Washington convinced Rosenwald to allow part of the money to be used for a pilot program to build six schools in rural Alabama. Impressed with the results, Rosenwald donated $30,000 for construction of 100 rural schools and then he gave additional money for building another 200 schools. By 1920 the Julius Rosenwald Fund began a rural school building program for African American children that continued for the next twelve years in fifteen states, including Texas.

To qualify for the grants, which ranged from $500 for a one-teacher facility to $2,100 for a school large enough for ten teachers, the local African American community had to raise matching money in the form of cash, in-kind donations of materials, and labor. Many of the schools were built in freedmen communities where the residents were eager to offer education for their children. African American men often cut the lumber, hauled the material, and served as carpenters. The land and building had to be deeded to local authorities, and the school district had to maintain the property. The district was required to furnish new desks and blackboards for all classrooms as well as two hygienic privies for each building. Classes had to be held for more than five months of the year.

Floor plans were specific as well. The design included large windows on the east side of the building to allow for maximum natural lighting and small high windows on the west side to ensure cross ventilation while keeping out the hot afternoon sun. Many white schools adopted the Rosenwald designs because they were found to be so efficient.

Julius Rosenwald, who died in 1932, said it was easier to make a million dollars honestly than to give it away wisely. With that in mind and in light of changing social and economic conditions, he directed that all the Rosenwald Fund be spent within twenty-five years of his death. By 1948 when the program ended, Rosenwald and his fund had given over $70 million to schools, colleges, museums, Jewish charities, and African American institutions.

Ten to fifteen Rosenwald schools survive in Texas, and some are being restored as museums and community centers. In keeping with the original fundraising efforts, citizens are raising the money to bring back these historic buildings. Women in the Pleasant Hill area are selling quilts to restore the Rosenwald School. A Baptist Church near Seguin is using the Sweet Home Vocational and Agricultural High School as their fellowship hall and nutritional center. A U-Tube video tells the story of the West Columbia Rosenwald School, which was being used as hay barn before it was restored in 2001 as a museum. The Texas Historical Commission began in the mid-1990s to inventory the Rosenwald School Building Project and to apply for listing as National Register of Historic Places.