Baylor University boasts a claim to fame that has nothing to do with its football team. The world’s largest collection of works pertaining to the Victorian poets Robert and Elizabeth Barrett Browning reside in the elegant Armstrong Browning Library. The unlikely repository of 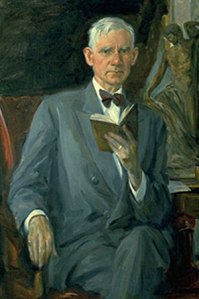 the English poets’ books, letters, and manuscripts on a campus in Central Texas happened because of the sheer determination of the Chair of the English Department–– Andrew Joseph Armstrong (1873-1954) ––a moving force at Baylor. 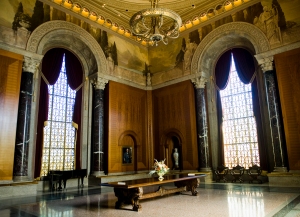 McLean Foyer of Meditation. The light coming through the windows offer a feeling of sunrise and sunset.

Dr. A. J. Armstrong began his collection of Browning books about 1905. Four years later, he spent several days in Italy visiting with the poets’ son. Unfortunately, Robert Wiedeman Barrett Browning, whom the family called Pen, died in 1912 without a will. The estate was sold at auction, which sent Armstrong on a lifelong mission to raise money in every way he could to acquire items associated with the Brownings. He challenged donors and former students for gifts. He and his wife developed one of the first college “travel courses” hosting over thirty European tours. His deep Baptist faith and the wisdom he found in Browning’s poems led to his philosophy of life that he imparted to his students with challenges like “Don’t be colorless; be somebody!” and “No man should attain his ideal-–it should be his starting point for tomorrow.”

He gave his personal Browning works to Baylor in 1918, and the growing collection needed a building of its own. In 1943, Baylor President Pat N. Neff donated $100,000 for a new structure and challenged Armstrong to raise the balance.

Armstrong, at age seventy, had always worked an eighteen-hour day, teaching classes on Robert Browning, Dante, Shakespeare, the Bible as Literature, and a modern poetry class. On Sundays, he taught the largest men’s college class at the First Baptist Church, and he lectured weekly for a large women’s literature class.  He sponsored an honorary English society and pushed the carefully selected members to strive toward their own creativity. Still, he drove the fundraising forward and amid grand fanfare the 1.75 million-dollar Armstrong Brown Library opened on December 1, 1951. When questioned about the cost of the structure, Dr. Browning said, “If we can create a place where young people can meditate on great thoughts and by that means give the world another Dante, another Shakespeare, another Browning, we shall count the cost a bargain.”

On all three floors, visitors find sixty-two stained glass windows, believed to be the largest collection of secular stained glass, forty-seven of which follow the themes of Robert Browning’s poetry. Eight windows illumine Elizabeth Barrett Brownings Sonnets from the Portuguese. Of the more than 500 books, about 300 are from the personal libraries of Robert and Elizabeth Barrett Browning or their immediate family. Some of the pages bear notations made by the poets.

Although Andrew Joseph Armstrong died on March 31, 1954, his grand legacy continues to thrive.

2 thoughts on “Jewel on the Baylor Campus”