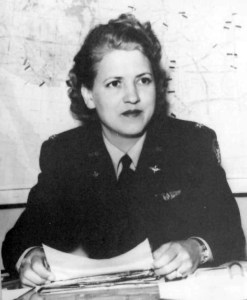 Finally, after lobbying by Eleanor Roosevelt and the military’s realization that there were not enough male pilots, in September 1942 Nancy Love gained permission to recruit women for training in the Women’s Auxiliary Ferrying Squadron (WAFS) at New Castle Army Air Base in Wilmington, Delaware. Soon, Jackie Cochran returned from Britain to win appointment as director of the Women’s Flying Training Detachment (WFTD) headquartered at Houston’s Municipal Airport (present Hobby Airport). The new recruits were classified as civil service, not military personnel.  Calling themselves “guinea pigs,” the Houston WFTD were housed in motels and private homes and transported to the airfield each day in trailer trucks. They had no life insurance; there were no crash trucks or fire trucks on the airfield, and they had no uniforms. Since there were no facilities for changing clothes they wore the same gear—GI coveralls in the standard size 52, which they called “zoot suits”—to ground school, to drill, to fly, and to march to and from the mess hall. 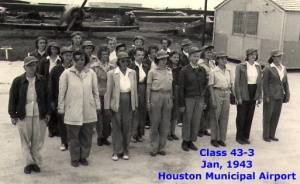 When they were moved in early 1943 to better quarters at Avenger Field—the only all-female air base in history—at present Sweetwater, they had to pay their own way and pay for their room and board. If they washed out of the program, they had to pay their fare back home. After the WFTDs and the WAFS merged in August 1943 to form the Women’s Airforce Service Pilots (WASPS), Jackie Cochran became the director of the program and Nancy Love headed the ferrying division.

Jackie Cochran recruited women from all over the country but excluded black pilots claiming that since the program was new, innovative, and not very popular, including black pilots might endanger the service’s status. More than 25,000 women applied, fewer than 1,900 were accepted. After seven months of military flight training, 1,074 earned their wings to become the first women to fly American military aircraft—a rate comparable to male cadets in the Central Flying Training Command.

The WASPs were all pilots with a minimum of 100 hours when they entered the service, but they were trained to fly “the Army way.” Their program followed the same course as male Army Air Corps pilots except for no gunnery training and very little aerobatic and formation flying. The women received 210 hours of flying time divided equally between PT-17s, BT-13s, and AT-6s.

The WASP flew sixty million miles ferrying 12,650 aircraft from factories to military bases and ports of embarkation. They towed targets for live anti-aircraft artillery practice and flew simulated strafing missions, even dropping tear gas and other chemical agents during the training of ground troops. They accepted the very dangerous task of testing damaged airplanes. As part of bomber crew training, WASPs flew the aircraft while male combat trainees practiced as bombardiers, navigators, and gunners.

When the AAF reached a surplus of male pilots toward the end of 1944, it was determined that the WASP was no longer needed. By the time the WASP was disbanded on December 20, 1944, thirty-eight had been killed in accidents—eleven in training and twenty-seven during active duty. Since they were not considered military, the dead were sent home at the family expense and did not receive military honors. Even their coffins could not be draped with the U. S. flag.

In her June 1, 1945 report, Jackie Cochran wrote that WASP safety, accident, and fatality rates compared favorably with male pilot records. Despite her report, WASP records were classified secret and sealed, not to be released for thirty-five years.  Ironically, Colonel Bruce Arnold, son of General Hap Arnold who had originally been opposed to women pilots, began lobbying in 1975 to have the WASPs recognized as veterans. With the help of Senator Barry Goldwater, who had served as a WWII ferry pilot, Congress passed the G.I. Bill Improvement Act of 1977, granting the WASP corps full military status for their service.

The National WASP WWII Museum is located in Sweetwater near Avenger Field.

4 thoughts on “WOMEN PILOTS OF WWII”