Texans make a lot of extravagant claims. Sometimes they are true; like the story about having camels in Texas. Jefferson Davis, Secretary of War (1853-1857) under President Franklin Pierce, convinced Congress to appropriate $30,000 to buy and import camels for military use as beasts of burden. Davis claimed that camels were well-suited to the desert-like conditions of the West because they carried tremendous loads, traveled long distances without water and would forage on any plant.

On May 13, 1856, citizens of the thriving seaport of Indianola on the Texas Gulf Coast turned out in droves to watch thirty-two adult camels and one calf wildly rearing, breaking halters, kicking, and crying as three Arabs and two Turk handlers made a valiant effort to control the beasts. Before the day ended the camels regained their land legs and amid the tingling of bells hanging from their saddles, they plodded docilely toward the corral constructed by the War Department.

A horseback rider rode ahead of the camels shouting to get horses and mules out of the way since the sight and smell of the strange beasts sent both horses and mules into frightened frenzies causing runaway wagons and tossed riders. The townspeople followed the parade thoroughly enjoying the commotion.

Some accounts claim that the War Department ran out of wood for building the corral and resorted to stacking up the plentiful prickly pear cactus for fencing. The camels ate the prickly pear.

Major H.C. Wayne, who purchased the camels and accompanied them to Texas, reported to Secretary Davis that Indianolans voiced skepticism about camels being stronger than their mules and oxen. In sort of a PR stunt, Major Wayne directed one of the handlers to take a camel to the Quartermaster’s forage house for four bales of hay. Major Wayne mingled among the crowd listening to the derisive comments of those certain the kneeling camel could not rise under the burden of two bales weighing 613 pounds. Then two more bales were added for an incredible 1,256 pounds. To the astonishment of the onlookers, the camel rose on command and easily walked away.

After three weeks of exercising to prepare the camels for the 200-mile trek to Camp Verde on the western frontier of Texas, the procession moved majestically across the prairie.

A Victoria woman along the route gathered some of the camel hair and knitted socks for President Franklin Pierce. He sent a thank you letter but did not mention wearing the things.

The experiment proved so successful that an additional forty-one camels arrived in 1857. The beasts carried supplies for a team surveying a wagon road from New Mexico to the Colorado River and on to California. They hauled supplies in the first expedition to explore and map 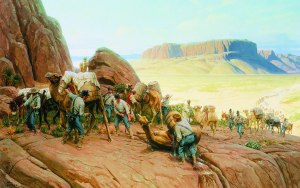 the Big Bend on the Texas/Mexican border.

A Methodist circuit rider, John Wesley Devilbiss, wrote that he was conducting a brush arbor camp meeting south of Camp Verde when six camels walked into the meeting carrying wives and children of Camp Verde military officers. At the end of the day, the visitors climbed aboard the docile beasts and plodded away.

When Texas seceded from the Union, Federal troops abandoned the western frontier and the camels were left to roam. The Confederates used some camels to pack cotton bales to Mexico where international ships waited to barter for guns and medical supplies. One camel carried all the baggage for an entire infantry company.

Although the camels fulfilled all expectations as beasts of burden, they were eventually sold. Some were purchased by circuses and others roamed the West until they died out. They never gained acceptance because they smelled terrible, they frightened horses and mules, and their handlers, who preferred the more docile mules, hated them. 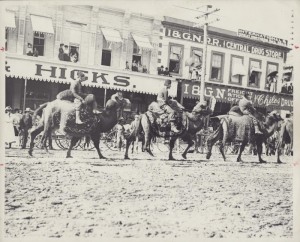 2 thoughts on “A Texas Camel Story”