They wore black dresses covered by starched white pinafores, opaque black stockings, black shoes, and hairnets secured with a regulation white ribbon. They were The Harvey Girls who could serve a meal in thirty minutes that included fillet of whitefish with Madeira sauce or 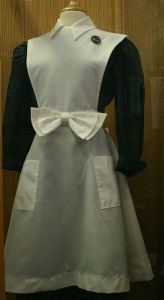 As railroads spread across the country, passengers either carried their own food, endured meals that often included rancid meat and cold beans, or simply did without. Fred Harvey, a dapper British immigrant who worked as a railroad freight agent, observed the terrible conditions on trains and convinced the Atchison, Topeka and Santa Fe Railway in 1876 to let him open a restaurant in Topeka, Kansas. His idea of fine fresh food at a reasonable price proved so popular that his establishments began spreading along the railroad. Harvey Houses reached the isolated cattle towns of West Texas in the 1890s and crossed the state from El Paso and Amarillo to Dallas and Houston and south to Kingsville. Even in remote towns, up to four passenger trains came through daily carrying from fifty to eighty people who expected to be fed in thirty minutes.

From the beginning, the railroad allowed Harvey to set up his restaurants as he saw fit, which meant fine China and Irish table linens. He demanded civility, cleanliness, and high standards of efficiency. The Harvey girls were not called waitresses; they could not wear makeup or chew gum while on duty. He personally inspected his restaurants and was reported to have sometimes overturned a table that was not set to his standards. He advertised for “white, young women, 18 to 30 years of age, of good character, attractive and intelligent.” Upon entering their month of training they quickly learned that their work would be demanding—serving meals, polishing silver, brewing fresh coffee every two hours, and following a strict code in dealing with customers. Beginning pay was $17.50 a month, including room, board, and tips. They lived in dormitories with a ten o’clock curfew and were supervised by a senior Harvey Girl who served much like a housemother.

Although the environment sounds harsh by today’s standards, it allowed young women a rare career opportunity. In later years, married women entered the program and benefited from the chance to add to family income. Some of the women were widows who claimed that they and their children were welcomed like family into the Harvey House environment.

Harvey branched into hotels alongside depots, eventually opening eighty-four facilities. When railroads began offering food service, he reluctantly agreed to staff dining cars with Fred Harvey Company personnel. The Harvey brand began moving in the 1930s to locations away from the Santa Fe Railroad, and in 1959 the restaurants started lining the Illinois Tollway. Although the Harvey House era came to an end with the death in 1965 of Fred Harvey’s grandson, the company is credited with offering the first “blue plate special”—a good meal at a reasonable price––creating the first restaurant chain in the United States, and opening tourism to the American Southwest by making railroad travel more enjoyable.

6 thoughts on “The Harvey Girls”