Many stories survive from the 1836 Texas War for Independence from Mexico, but several almost forgotten tales surround the deeds of a beautiful young Mexican woman whose name is shrouded in the mists of history and legend. To a person they called her the “Angel of 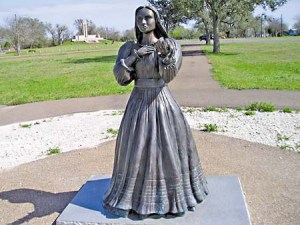 She steps onto the scene as the woman accompanying Capt. Telesforo Alavez when his ship from Matamoros, Mexico, landed at Copano Bay on the middle Texas coast about the same day as the fall of the Alamo on March 6, 1836. Variously called Francita, or Panchita, or Francisca, those who met her assumed she traveled as Capt. Alavez’ wife; however camp women regularly followed the Mexican army, and later research disclosed that Capt. Alavez had abandoned his wife and children in Mexico the previous year.

When Francita arrived at Copano Bay, she discovered that General José de Urrea’s army held prisoners who were bound so tightly that the cords cut off the circulation in their arms. Several of those men remember her as the beautiful Mexican lady who convinced the guards to loosen the bonds and give them food.

As he headed to San Antonio and the Battle of the Alamo, General Santa Anna split his forces, directing Urrea’s army to move toward Presidio La Bahía, an ancient fort housing 500 militia, the largest collection of men in the Texas army.

It is unclear which route Capt. Alavez took with his cavalry regiment as he moved from the Texas coast to join Gen. Urrea’s forces. Some accounts claim a priest and “a Mexican lady named ‘Alvarez’” convinced Gen. Urrea at San Patricio to save the lives of twenty-one captives and ship them back to prison in Matamoros, thereby ignoring Santa Anna’s repeated orders to shoot all prisoners taken in arms. 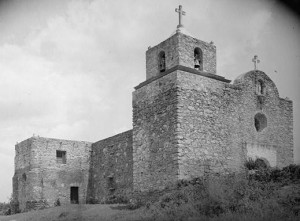 While Urrea continued his march toward Presidio La Bahía, the commander at the at the old fort, Colonel James W. Fannin, ignored orders from General Sam Houston to abandon La Bahía and join forces with Houston’s ragtag volunteers as they moved ahead of Santa Anna’s advancing army.

Fannin delayed for five days before he began a slow march out of the presidio, only to be overtaken in mid-afternoon by Urrea’s rapidly advancing force. The Texans and the Mexicans fought valiantly until darkness fell. Without sufficient water for cooling their cannons or to ease the suffering of the injured, and without the hoped-for reinforcement by the next morning, the Texans chose surrender.

Despite the decree that Santa Anna pushed through the Mexican Congress the previous December, which directed that all foreigners taken in arms against the government should be treated as pirates and shot, General Urrea appealed to Santa Anna for clemency for Fannin and his men.

Urrea’s force moved on to capture nearby Victoria while about 240 uninjured or slightly wounded were marched back to Presidio La Bahía under the direction of Col. José Nicolás de la Portilla. Colonel Fannin who had sustained an injury and about fifty more severely wounded were moved back to La Bahía over the next two days. Again, Francita appears as a comforter of the suffering, intervening to improve care for the prisoners crowded into the presidio’s 85- x 25-foot Chapel of Nuestra Señora de Loreto. Soon, more prisoners from other battles arrived to increase the population to over 500.

A letter from Santa Anna arrived on March 26 demanding that Col. Portilla carry out the orders to execute the prisoners. Two hours later, Portilla received a letter from Urrea imploring him to treat the prisoners with respect, especially Col. Fannin.

Despite being torn between conflicting orders, Portilla continued with plans to execute the prisoners at dawn the next morning––Palm Sunday, March 27. The prisoners were marched out in three groups––some believed they were going to gather wood, others expected to drive cattle, another group thought they were headed to Copano Bay for shipment to freedom in New Orleans.

Apparently Francita heard of the plans to murder the troops, for she worked during the night with several officers to hide about twenty men. Dr. Joseph H. Barnard, who was spared from the massacre and sent, with another doctor, to the Alamo to aid the injured Mexicans, wrote that “during the time of the massacre she (Francita) stood in the street, her hair floating, speaking wildly, and abusing the Mexican officers, especially Portilla. She appeared almost frantic.”

Another account, written years later by Benjamin Franklin Hughes, who at age fifteen had served as an orderly, claimed that his group believed they marched toward embarkation and return home. He saw Urrea’s wife and a young lady he called “Madame Captain Alvarez” watching the groups move out. As Hughes marched past, the ladies directed that he be taken from the ranks and placed between them. Within minutes, by a prearranged signal, the massacre began, and Hughes realized the women had saved his life.

A study of Fannin’s command indicates 342 executed, including Fannin and the wounded that were shot in the fort’s quadrangle. Only twenty-eight escaped the firing squads by diving into the nearby San Antonio River or escaping through the woods along the riverbank. A group of blacksmiths, wheelwrights, and other artisans that were needed to serve the Mexican army also escaped the massacre. About eight avoided execution because Portilla claimed they were not captured “while bearing arms.”

Although Francita accompanied Captain Alavez on to Victoria, she continued to send messages and supplies to the surviving prisoners at La Bahía. The grandson of one of the Victoria families preserved stories of the wives of Mexican officers throwing themselves in front of a firing squad, successfully halting the execution of three or four prisoners.

After Texas won independence from Mexico and captured Santa Anna in the Battle of San Jacinto on April 21, 1836, the Mexicans began a slow retreat. Captain Alavez evacuated his Victoria post and returned to Matamoros where Texans told of “Señora Alavez” ministering to the prisoners. After she followed Captain Alavez on to Mexico City, he abandoned her. Returning to Matamoros penniless, she found friends among the Texans who remembered her kind treatment. However, none of the people who told the story of her humanitarian deeds ever bothered to accurately record her name.

2 thoughts on “THE ANGEL OF GOLIAD”