A book written by Jan Jarboe Russell and published in 2015 by Scribner relates a chapter in Texas history that I have just discovered. I believe it deserves special attention at this time when our country is again roiling in fear of immigrants. The arrest and internment of Japanese 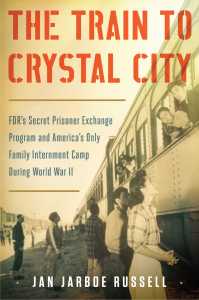 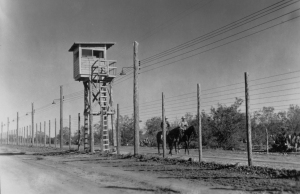 Americans during World War II has been well-documented, but nothing until now has been published about the program to arrest and repatriate to their country of origin German, Japanese, and Italian families.

On February 19, 1942, President Roosevelt signed an executive order authorizing the arrest and incarceration of Japanese, Germans, and Italians who were declared “enemy aliens.” Our country also orchestrated and financed the removal of thousands of these same families from thirteen Latin American countries. They were brought to the internment camp in Texas.

In her book, The Train To Crystal City: FDR’s Secret Prisoner Exchange Program and America’s Only Family Internment Camp During World War II, Jan Russell documents the lives, the fierce patriotism, and the resilience of some of the 6,000 civilians held in the Crystal City Enemy Detention Facility. The vast majority were loyal to America. They were forced out of their homes, lost their businesses, and were never charged with any crime. The men were allowed to have their families join them in prison if they agreed to take part in a repatriation program with Germany and Japan. Although their children were born in this country, they were exchanged for other Americans––soldiers, diplomats, businessmen, missionaries, and physicians––who were being detained behind enemy lines in Germany and Japan.

The wives and children, wearing family ID tags around their necks, were shipped on trains with the curtains drawn to Crystal City, to rejoin their husbands and fathers in the dusty South Texas town that boasted the friendly moniker, “Spinach 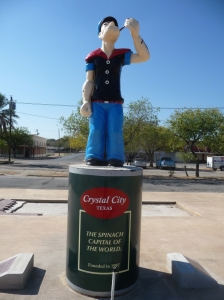 Spinach Capital of the World

Capital of the World.”

The 290-acre camp was enclosed by a ten-foot high barbed-wire fence, anchored by six towers manned by guards with long rifles. Men on horseback patrolled the perimeter, and the night searchlights were visible thirty miles away across the border in Mexico.

Fear of the foreigners, many of whom were in the process of becoming American citizens, resulted in mob attacks on businesses of Japanese on the West Coast and Germans on the East Coast. Newspaper columnists argued for American’s safety over civil rights. Politicians and military officials pressured FDR to act against these civilians. Finally, in 1944 the Supreme Court in a six to three ruling legalized the detention. Justice Hugo Black wrote for the majority that the need to protect against espionage outweighed individual rights.

Russell conducted interviews with over fifty survivors, used private diaries and journals, obtained access to FBI files and camp administration records to paint a picture of a place where most of the internees did not understand why they were 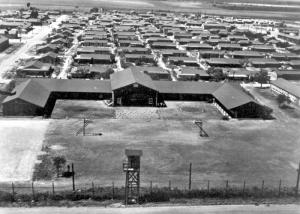 School with barbed-wire fence in foreground

being held but continued to maintain hope for their release. The camp was organized into ethnic communities with two-family cottages. They could choose to send their children to Japanese, German, or the federal (American) school where the students would learn English. The inmates were allowed to run their own communities, organize churches, a library, a hospital, barber shops and beauty parlors. In the summer of 1943 German internees dredged an existing reservoir to build a combination swimming pool and reservoir for irrigating the camp’s vegetable gardens. Despite the semblance of freedom, each morning they had to line up for roll call and their mail was censored. Even though they were not charged with a crime, the length of their internment was indefinite.

Russell chronicles the story of two teenage girls––a German and a Japanese––whose families were finally exchanged, sent back to the devastation of Germany right after the Battle of the Bulge and to Japan after the bombing of Hiroshima. She relates the story of their determination to survive and to eventually return to the United States.

Today, all five hundred buildings are gone. The site belongs to the local school district and is noted by a memorial on the foundation of one of the cottages and a nearby Texas Historical Marker. 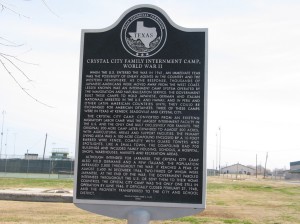 Texas Historical Marker at the former site of the Internment Camp

10 thoughts on “The Train to Crystal City”