Felipe Enrique Neri (1759-1827), a charming gentleman hailed in Texas as the Baron de Bastrop, paved the way for the first Anglo-American colony in Texas. No one knew he left his wife and five children in Holland or that he fled his country with a bounty of 1,000 gold ducats 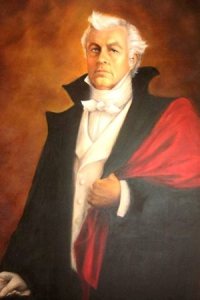 on his head for embezzling taxes from the province of Friesland.

Neri arrived in Spanish Louisiana in 1795, claiming to be the Baron de Bastrop, a Dutch nobleman forced to leave Holland after the French invasion. After ten years of various business dealings, including settling ninety-nine colonists under a Spanish land grant, Neri appeared in San Antonio in 1806 assuming an air of gentility and posing as a loyal Spanish subject, adamantly opposed to the United States’ 1803 Louisiana Purchase. As the Baron de Bastrop, Neri opened a freighting business in San Antonio and soon gained enough respect to be appointed alcalde (mayor) in the ayuntamiento (local government).

If you read my blog on Moses Austin, you may remember that in an odd twist of fate, Austin chanced to meet his old friend Baron de Bastrop, whom he had known in Louisiana, on the plaza in San Antonio after the Spanish Governor flatly refused to even consider Austin’s request to establish a colony in Texas. In fact, the governor ordered Austin to leave San Antonio immediately. Under such contrary circumstances, it is obvious that Baron de Bastrop held considerable influence with the Spanish officials. He convinced the Spanish governor to accept Moses Austin’s grant request by arguing that Spain needed settlers occupying the country between San Antonio and the Sabine River as a cushion against the Indian threat; that Spaniards and Mexicans were not coming into Texas, rather they were leaving; and that Anglo colonization had already proven successful in Spanish Louisiana. Within three days the Spanish governor granted Austin permission to establish his colony in Texas.

After Moses Austin’s unexpected death, his son Stephen F. Austin came to Texas to apply for his father’s grant. In the meantime, Mexico had won its independence from Spain, and the Baron de Bastrop again used his influence with the Mexican authorities to negotiate an empresarial grant for Stephen to continue with the original plan to settle 300 families in Texas.

By 1823 Bastrop won appointment as Stephen F. Austin’s commissioner of colonization with authority to issue land titles. That same year, he tried and failed to establish a German colony on a site where the San Antonio Road (King’s Highway) crossed the Colorado River. However, from all accounts, he faithfully handled his duties for Austin. Even after Bastrop was chosen in 1824 as a legislator representing the new state of Coahuila and Texas, he served as an ideal intermediary for Austin with the Mexican government. He helped enact laws that were in the best interest of the colonists such as an act establishing a port at Galveston.

Mexican law required the salary of legislators to be paid by contributions from their constituents. Bastrop received such sparse payments that when he died on February 23, 1827, he lacked enough money for his burial. Despite the state of poverty in which he died, the Baron de Bastrop still claiming to be of noble birth in his last will and testament, left land to his wife and children.

After Stephen F. Austin fulfilled his original contract to settle the first 300 families in Texas, he secured another grant in 1827 for his “Little Colony,” which allowed settlement of another 100 families in the area that included the baron’s failed grant. Austin had noted in his first trip to Texas, the importance of that river crossing on the Colorado, and he named the community that developed at the site, Bastrop, in honor of his friend who had recently passed.

Although many people in his day viewed the Baron de Bastrop’s origins as suspect—some believed him to be an American adventurer—he held respect for his diplomatic and legislative work on behalf of Texas. In the past fifty years records from the Netherlands revealed the true story of his mysterious past.