The second battle of the Alamo began in the early 20th century as a disagreement between two powerful women over the proper way to preserve the Alamo. The old complex had been allowed, after the famous battle in 1836 and the slaughter of the men who fought there, to fall 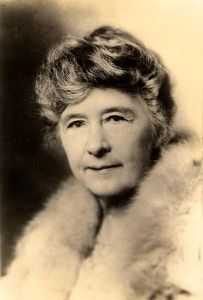 into an embarrassing state of neglect and disrepair. Adina Emilia De Zavala, granddaughter of Lorenzo de Zavala the first Vice President of the Republic of Texas, was a schoolteacher, a prolific writer of Texas history, and an early advocate of restoration of the missions in San Antonio and other historic structures. About 1889, she organized the “De Zavala Daughters,” dedicated to preserving Texas history, which soon became a chapter of the Daughters of the Republic of Texas (DRT).

Although the state of Texas had purchased the main entrance known as the Alamo chapel from the Catholic Church in 1883, the state did nothing to preserve the structure. At some point, a wholesale grocer bought the building north of the chapel, added a second floor, and altered the façade. De Zavala and her friends believed that old building had served as the convent when the complex was a Spanish mission. They were also convinced that it had been used as the long barracks where most of the fighting occurred during the Battle of the Alamo. The De Zavala group secured an agreement from the grocer to give them first option to purchase the long barracks, which they dreamed of restoring to its former appearance and opening as a museum. 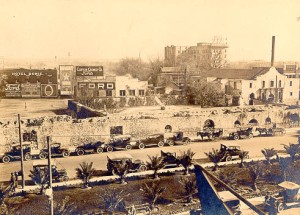 In 1903, when the De Zavala group heard that the long barracks might be sold to a hotel syndicate, Adina De Zavala sought the help of Clara Driscoll a nineteen-year-old heiress who had returned to San Antonio after several years studying in Europe. Driscoll was so appalled at the condition of the Alamo that she wrote an article for the Daily Express calling the Alamo complex an “old ruin…. hemmed in on one side by a hideous barracks-like looking building, and on the other by two saloons.” Clara Driscoll joined the De Zavala chapter of the DRT and went with Adina De Zavala to see the grocer who was asking $75,000 for the structure. Clara Driscoll personally gave the owner $500 for a thirty-day option and the ladies set about raising the purchase price. Despite a nationwide campaign and a legislative appropriation, which Governor S.W.T. Lanham vetoed as “not a justifiable expenditure of the taxpayers’ money,” Clara Driscoll eventually paid $65,000 to complete the purchase. Over the governor’s objection, the state reimbursed Clara Driscoll and gave custody of the property to the Daughters of the Republic of Texas.

Then, cracks began to show in the bulwark of the organization as members divided over what should be done with the grocer’s building. Adina De Zavala and her cohorts believed “a large part” of the original convent/long barracks played a significant role in the Battle of the Alamo and remained hidden under the grocer’s building. Clara Driscoll and her camp believed the walls of the convent/long barracks overshadowed the Alamo chapel and should be replaced with a dignified park.

Members of the statewide DRT and citizens in San Antonio and Texas divided into De Zavalans and Driscollites, each faction determined to have its way. The two groups within the DRT separated from each other and when Clara Driscoll was given custody of the vacant grocery in 1908, Adina De Zavala locked herself in the building for three days as newspaper reporters from around the country gathered to watch the spectacle.

By 1910 the Driscollites seemed to have won the war, but one more battle remained: Governor Oscar Colquitt, became convinced that walls under the modern grocery building pre-dated the Battle at the Alamo. He ordered restoration of the convent/barracks. In January 1912, the governor personally watched as removal of the modern additions revealed arches and Spanish stone work—confirming the De Zavalans’ claim. However, the following year, while the governor was out of state, the lieutenant governor permitted the roof and walls of the upper story to be removed. Fifty-five years later, just in time for the 1968 opening of HemisFair, San Antonio’s world’s fair, the old building finally received a roof and opened as a museum.

Historical footprint of the Alamo complex.

Adina De Zavala continued for the rest of her life organizing groups that restored, marked and preserved historic sites. When she died in 1955 at the age of ninety-three, her casket draped with the Texas flag was driven past the Alamo one last time. She willed her estate to the Sisters of Charity of the Incarnate Word for a girl’s vocational school and a boys town.

Clara Driscoll spent the remainder of her life devoted to historic preservation, state and national politics, civic and philanthropic endeavors. When she died in 1945 at the age of sixty-four, her body laid in state at the Alamo chapel. She bequeathed the bulk of her estate to the Driscoll Foundation Children’s Hospital in Corpus Christi.

7 thoughts on “Ladies Fought the Second Battle of the Alamo”