In 1901 the first electric interurban or trolley, began operating on a 10.5-mile track between Denison and Sherman in North Texas. The thirty-minute trip on the seventy-pound steel rails cost twenty-five cents. The line proved so successful that a second route between Dallas and

Fort Worth opened the following year. A fourteen-mile track started between Belton and Temple and by 1909 the original line extended all the way south from Denison to Dallas. In five years the line moved further south to Waco and other lines began between Beaumont and Port Arthur, El Paso and Ysleta, and Houston, Baytown, and Goose Creek. 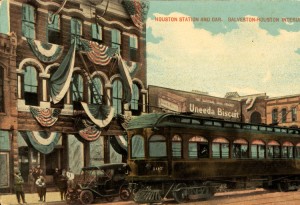 The interurban between Houston and Galveston started carrying passengers in 1911 after Galveston rebuilt following the devastating 1900 storm. The city constructed a seventeen-foot seawall, raised the level of the island, and opened a new $2 million causeway to the mainland to accommodate the electric interurban, railroad tracks, and a highway. The Houston-Galveston Interurban boasted an observation car and the fastest schedule of any steam or electric railroad. It made the fifty-mile downtown-to-downtown trek in seventy-five minutes with the help of a thirty-four-mile “tangent”—a section of straight track that allowed the carriage to travel at fifty-five miles per hour. Passengers rode to Galveston for an evening on the beach or in the gambling houses and then took the 11:00 p.m. interurban back to Houston.

Other areas offered special excursions between cities. Baseball teams grew up along the interurban, and passengers flocked to see games of the Class C and D Trolley League.

The frequent service, convenient stops within cities, and lower fares of the interurbans overcame all competition with steam railroads. At the peak of the service in 1920, nearly four million passengers enjoyed the trolleys that boasted carpeted cars with lounge chairs, spittoons, and rest rooms. By 1931, ten systems across the state covered over five hundred miles.

The advent of the automobile and the convenient travel it offered spelled doom for the interurbans. The lines began closing. Their tracks were paved over to make way for their competition—the automobile. On December 31, 1948, the old Denison to Dallas line made its final run.