One of thirteen children born to sharecroppers in 1892, Bessie grew up in Waxahachie south of Dallas vowing to “amount to something.” That dream was a long time in coming. She attended a one-room segregated school where she excelled in reading and math. Her father who was part Cherokee left the family when Bessie was eight and moved to Indian Territory (present Oklahoma) where he believed he would find fewer personal barriers. Bessie and the other children helped their mother with the washing and ironing that she took in and they picked cotton to add to the family income.

After graduating high school, Bessie took her savings to Oklahoma Colored Agricultural and Normal University (present Langston University) but she ran out of money at the end of the first semester. While living with a brother in Chicago during World War I and working as a manicurist, she heard the returning pilots talk about flying during the war. The publisher of the Chicago Defender, an African American newspaper, was so impressed by Bessie’s potential that he and a local banker provided financial backing for Bessie to go to France for pilot training. She took a French language course and left for Paris on November 20, 1920.

According to Doris Rich in Queen Bess: Daredevil Aviator, Bessie learned to fly in a Nieuport Type 82 biplane, with “a steering system that consisted of a vertical stick the thickness of a baseball bat in front of the pilot and a rudder bar under the pilot’s feet.” She went on to improve her skills with lessons from an ace French pilot before returning to New York in September 1921. She soon realized that to earn a living as a pilot, she would have to become a “barnstorming” stunt flier, which required additional training. Still unable to find anyone willing to teach her, she again sailed to Europe for advanced study in France and training in Germany from one of the chief pilots at an aircraft design corporation.

For five years she wowed crowds, both black and white, that called her “Queen Bess” for her daring exhibition flying. She flew a Curtiss JN-4 “Jenny” biplane, a surplus army aircraft leftover from the war. Her first appearance on September 3, 1922, on Long Island was to honor veterans of the all-black 369th Infantry Regiment of World War I. Later in Chicago (at present Midway Airport), she performed daredevil figure eights, loops, and near-ground dips.

Continuing with her goal of “amounting to something,” she accepted a roll in Shadow and Sunshine, a film she hoped would offer the income to finance her own flying school. However, when she realized the film opened with her wearing tattered clothing, using a walking stick, and carrying a pack on her back, Doris Duke wrote that Bessie “walked off the movie set as a statement of principle. . . She had no intention of perpetuating the derogatory image most whites had of most blacks.”

As she traveled the country performing, she often spoke at schools and churches encouraging young blacks to consider careers in aviation. On one of her trips to Waxahachie, she refused to give an exhibition on the school grounds unless blacks were allowed to use the same entrance as whites. Her request was honored, but once inside, blacks and whites remained segregated. 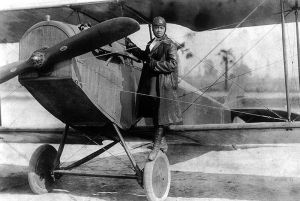 became known as “Brave Bessie” for her daring stunts and was celebrated as one of the most popular fliers in the country. On April 30, 1926, she was scheduled to perform in a show sponsored by the Negro Welfare League in Jacksonville, Florida. Ignoring the concern of family and friends who did not think her Curtiss JN-4 “Jenny” was safe, she took off on a test flight with her mechanic and her publicity agent piloting the plane. She did not buckle her seatbelt because she intended to make a parachute jump during the performance the following day and she wanted to be able to look over the cockpit sill to check out the landing site below. Just minutes into the flight, the plane failed to pull out of a dive, went into a spin and threw Bessie out of the plane at a height of 2,000 feet. The pilot died on impact and the plane burst into flames. An investigation revealed that a loose wrench, probably used for service, had jammed the plane’s controls.

Her death at age thirty-four came before she fulfilled her dream of establishing flying schools for black students, but she was not forgotten. Bessie Coleman Aero groups organized and on Labor Day in 1931, 15,000 spectators saw the first all-black air show in America sponsored by the Aeros. Black female student pilots in 1977 organized the Bessie Coleman Aviators Club. A street in Chicago in 1990 was renamed Bessie Coleman Drive, and Chicago declared May 2, 1992, as Bessie Coleman Day. Finally, in 1995 the U.S. Postal Service issued a thirty-two-cent commemorative stamp in honor of Bessie Coleman.