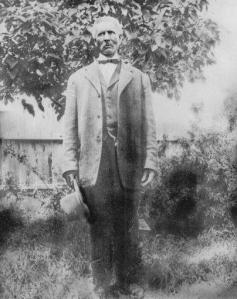 More than a quarter of the cowboys in the 19th century were black and Bose Ikard became one of the most famous frontiersmen and trail drivers in Texas. Born on a Mississippi slave plantation in 1843, Bose Ikard moved to Texas when he was nine years old with his master Dr. Milton Ikard. The family settled in Parker County, just west of Fort Worth, where Bose learned to farm, ranch, and fight the ever-present Indians.   Even after becoming a freedman at the end of the Civil War, Bose stayed with his master’s family until 1866 when Dr. Ikard wrote a letter of recommendation for Bose to work as a trail driver for Oliver Loving and his partner Charles Goodnight. Bose joined the already famous Goodnight-Loving Cattle Trail over which about eighteen men drove cattle more than 2,000 miles from Texas through New Mexico to Colorado.

After Loving’s death from injuries in an Indian fight in 1867, Bose continued to work for Goodnight and earned his employer’s respect and abiding friendship. Goodnight is quoted as saying: “Bose surpassed any man I had in endurance and stamina. There was a dignity, cleanliness and reliability about him that was wonderful. His behavior was very good in a fight and he was probably the most devoted man to me that I ever knew. I have trusted him farther than any man. He was my banker, my detective, and everything else in Colorado, New Mexico, and the other wild country. The nearest and only bank was in Denver, and when we carried money, I gave it to Bose, for a thief would never think of robbing him. Bose could be trusted farther than any living man I know.”

Larry McMurtry patterned Lonesome Dove after the adventures of the Goodnight-Loving Trail, modeling the character Deets (played by Danny Glover) after Bose Ikard.

When Bose decided to leave the trail and marry in 1868 Charles Goodnight advised him to settle on a farm near Weatherford, an area west of Fort Worth that continued to be plagued by Indian attacks. In 1869 Bose rode with his former master Dr. Milton Ikard in a running battle against Quanah Parker, leader of the aloof and warlike Quahada Comanches who for a decade had refused to move to a reservation.

Bose and his wife Angelina had six children and continued over the years welcoming Goodnight to their home. After Bose died on January 4, 1929, Charles Goodnight had a granite marker placed at his friend’s grave in Greenwood Cemetery. It reads: “Bose Ikard served with me four years on the Goodnight-Loving Trail, never shirked a duty or disobeyed an order, rode with me in many stampedes, participated in three engagements with Comanches, splendid behavior.”