A Methodist preacher and a businessman started a training program for Sunday school teachers in 1874 at an outdoor summer camp setting on Chautauqua Lake in western New York state. It grew in popularity and soon “daughter” Chautauquas began springing up all over the United States. In the early days, the most popular lectures were inspirational and reform speeches. Over the years, the fare lightened with the addition of current events, story-telling, and travelogues—often in a humorous vein.

A few Waxahachie residents traveled to the summer adult education center when it became famous for its great speakers, musicians, preachers, and scientists. Their enthusiasm led to Waxahachie erecting a pavilion in 1900 for its first Chautauqua Summer Assembly. Two years later Waxahachie built an octagonal-shaped Chautauqua auditorium that seated 2,500. The all-wood building, 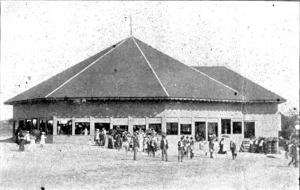 constructed at a cost of $2,750, boasted large windows that slid upward into the wall to create an open-air facility, which boasted electric lights. Hundreds and then thousands of enthusiastic farmer families and small-town residents from all over North Texas came in wagons and on horseback to camp out for a week to ten days; they slept in tents and under their wagons; and for the first time in their lives they enjoyed a chance to hear humorists, watch jugglers, listen to statesmen talk of patriotism, and actors read from Shakespeare.

The list of programs and the response of the audiences paints a clear picture of how eagerly rural and small-town residents grasped for an opportunity to know about the world and to be challenged with new information in those days before widespread communication. A professor from San Antonio’s Trinity University captivated the audience with experiments showing the many uses of liquid air. In 1906 a standing-room-only crowd arrived for a demonstration of wireless telegraphy. A packed house paid fifty cents a ticket to hear William Jennings Bryant, the famous populist orate on “The Price of a Soul.”

The attendees enjoyed plenty of social life. A Chautauqua Parlor offered popular piano and vocal solos and tables set up for games of Forty-Two. The local Young Men’s Chautauqua erected a social tent complete with electric fans and ice water. Later, they added sofas and rugs. The group became known as the “matrimonial agency” because of the number of couples that met there and later married.

Music brought in crowds especially when the U.S. Marine Band performed in 1914. Scottish music and the Highland Fling became a 1922 hit. The next year an electrical storm interrupted for twenty-five minutes a lecture and demonstration of electricity and the radio. John Phillip Sousa changed his schedule at the last minute in 1925 and crossed out Waxahachie on his hand-written itinerary and in its place wrote “Korsikana,” obviously meaning the lucky town of Corsicana a few miles down the road.

World War I themes turned to patriotism and the war effort. A war tax boosted the new ticket price of $2.50. A 1918 program highlighted war inventions—two-wheeled automobiles or gyrocars, airplanes with gyroscopes, ultra-violet rays, and hearing torpedoes—for a spellbound audience.

By the 1920s at the height of its popularity, twenty-one companies operated ninety-three Chautauqua circuits in the United States and Canada. Often, one performer finished his presentation and left for the train as another arrived. New York City actors brought plays such as “The Melting Pot,” “Little Women,” and Gilbert and Sullivan’s “Pinafore.”

Will Rogers, on his third U.S. tour, made a stop in Waxahachie in 1927. As the audience waited for his show, they listened in delight to a radio program amplified with music. Although he spoke for 101 minutes, some in attendance left disappointed because he did not do his famous trick roping, for which he named himself the “poet lariat.”

The advent of the automobile, the popularity of the radio, and the Great Depression began a slow erosion in the attendance at Chautauqua. Ticket sales declined, forcing local supporters to underwrite more and more of the Chautauqua expenses. By 1930 the Chautauqua Assembly in Waxahachie came to an end.

The old building slowly declined until members of the community formed the Chautauqua Preservation Society and began restoration. Today, Waxahachie, like so many communities all over the United States continue to offer Chautauqua entertainment and educational events. The original Chautauqua Institution continues to thrive each summer on the shores of Chautauqua Lake. 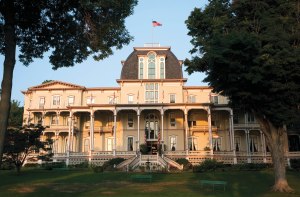 8 thoughts on “A Century of Chautauqua”