Residents in the East Texas town of Pittsburg house in the local museum a full-size replica of the Ezekiel Airship, which many old timers declare flew almost a year before the Wright brother’s claim to fame at Kitty Hawk, North Carolina.

Burrell Cannon, a mechanical genius and part-time Baptist preacher, inspired by the first and tenth chapters of Ezekiel in which the prophet writes of angelic vehicles composed of wheels within wheels, worked over twenty years building models and improving his design for a flying machine. In 1901, Cannon convinced Pittsburg businessmen to establish the Ezekiel Airship Manufacturing Company and issue stock for twenty thousand dollars to underwrite the project.

Employees of the Pittsburg Foundry and Machine Company built the airship between March and October 1902. Its engine turned four sets of paddles, which powered large, fabric-covered wings—incorporating a compulsion force similar to a helicopter.

Local residents claim seeing the airship fly for about 160 feet at a height of ten to twelve feet. A former machine shop worker admitted that one Sunday, when Cannon and the other investors were out of town, the employees took the plane out to the field across from the shop and he flew it. All the conspirators, fearing the loss of their jobs, made a pact not to tell anyone. If the story is true, it explains why no newspaper coverage exists and why officials of the company denied the flight.

On December 17, 1903, the Wright brothers took their famous flight.

The next year investors loaded the Ezekiel on a flatbed railroad car for a trip to the St. Louis World’s Fair. As the train neared Texarkana, a fierce storm blew the airship off the railcar and destroyed it.

The Reverend Cannon did not attempt another flight until 1913 in Chicago when his new craft flew only a few feet, hit a telephone pole, and received damage to the bottom of the ship. The Reverend, declaring God had not willed the airship to fly, promptly gave up the project. 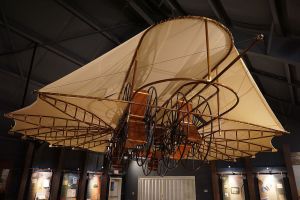 A Texas Historical Marker, which sits beside the railroad tracks at Fulton and South Market streets in Pittsburg, tells the story of the Ezekiel Airship.