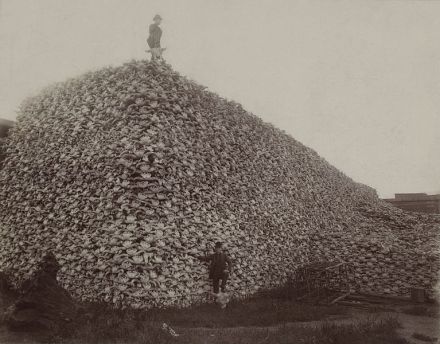 Bison Skulls–ready to be ground into fertilizer, Wikipedia

The buffalo represented big business in Texas for about four years beginning in 1874. The new southern transcontinental railroad made it possible to ship hides to eastern markets, and a New York brokerage house recognized an international demand for the hides. As in all booms, there were entrepreneurs ready to meet the demands and turn a profit. Charles Rath, a leading Dodge City merchant, saw the need for outfitting the buffalo hunters with their specialized equipment, and he acted quickly to take advantage of the new market.

For a time Rath’s agents followed the hunters with large trains of freight wagons to haul the hides back to Dodge City for shipping to the east. Then, Rath took his services to the hunters by establishing in 1876 a town called Rath City. This trading post in Stonewall County, the heart of buffalo country, provided a supply store, corral, hide yard, saloon, and a restaurant. An elevated Indian watchtower stood next to the corral. When buffalo hunters came into town, they slept in their wagons or in tents made of hides stretched over cedar poles. On one occasion in 1877 there were reported to be 1,100,000 buffalo hides stacked up waiting for shipment out of Rath City.

A skilled hunter could kill 100 buffalo in an hour or two, or 1,000 to 3,000 in a season. Men who skinned the slaughtered animals and left the carcasses to rot on the prairie usually followed the hunter. In reaction to the slaughter, the Texas Legislature entertained a bill protecting the buffalo, but opponents argued successfully that the slaughter of the buffalo would do more to rid the state of Indians than anything the army could do. For centuries Indians depended on the buffalo for their total survival: for food, clothing, shelter, utensils, and even their worship. Because of the buffalo’s importance to the Indians, the commercial slaughter was allowed to continue.

By 1878 the buffalo and the Indians disappeared from the Texas plains. The following year freight wagons hauled the last of the merchandise out of Rath City and the town–created to serve the buffalo market–closed.