The dream of finding a new life, the belief that if a man worked hard, he could “make it,” drove settlers by the thousands to the cheap land in Texas. If illness, death of the breadwinner, drought or crop failure forced a family into poverty, they and their neighbors believed that the need to accept public assistance was a form of moral failure.

During the Civil War, churches and charities that had always helped the indigent, could not keep up with the level of poverty after the men left for service in the Confederacy. When the men returned, they found four years of neglect, the cattle sold or stolen, fields grown up in weeds, and houses crumbling for lack of money or labor for repair. In an attempt to address the mounting problems of the destitute—young, old, mentally ill, and sick—an addendum was added to Texas’ 1869 constitution assigning to the counties the responsibility for providing a Manual Labor Poor House to care for the indigent and those who had committed petty crimes. Notice that lawbreakers were to be included in the poor houses—a clear indication of the disdain that coupled the impoverished with the criminal element of the community.

The Texas Historical Commission (THC) conducted a survey in 1987 and discovered that at least sixty-five of the 254 counties in Texas opened a poor farm. While very few of the farms kept records of the names, number or type of indigents housed in the facilities, Anderson County listed “indigent blind person, “indigent widow,” and “pauper” among its poor farm residents in 1887. The superintendent was allowed $6.50 per month to provide food and clothing for the paupers and twenty cents per day to feed the convicts and farm hands. The county paid for clothing, medicine and doctor visits for the tenants, but stipulated that funds would not be paid for babies nursing their own mother.

Debbie Cottrell’s research for her article in the Southwestern Historical Quarterly, July 1989-April 1990 reveals that most of the farms closed with the introduction of federal assistance programs during the Great Depression. Cottrell writes that three counties—Anderson, Parker, and Cass—left more records than most other counties. Anderson County, which opened its farm near Palestine in 1884, built a potato barn, a superintendent’s home, housing for indigents, and a jail. It operated until the 1940s. Parker County began housing indigent families south of Weatherford in barracks-style houses about 1889; by the 1930s the residents were mostly elderly. 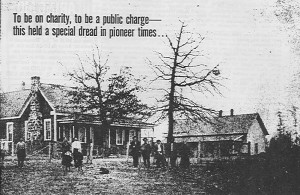 Cass County’s farm outside Linden opened in 1895 and replaced the earlier system of paying from $3 to $8 per month to individuals on the pauper list. Jean Howe Stow writes in Frontier Times that in Cass County to be eligible for residency in the poor farm a person could not “own more than $10 in worldly goods. . . had to appear before the commissioner’s court and take a pauper’s oath. . . declaring to the county judge and commissioners, ‘I am a pauper.’” Stow adds that “in addition to furnishing all the necessities of life for the paupers, the commissioners supplied them with the necessities of death . . . payment of $8 for a coffin and a payment of $2 for the digging of a grave.”

El Paso’s second poor farm was located in 1915 near the property of John O’Shea, a wealthy farmer and businessman, who took over operation of the poor farm. His wife Agnes O’Shea, was in charge of the residents, and in 1929 at the beginning of the Great Depression, 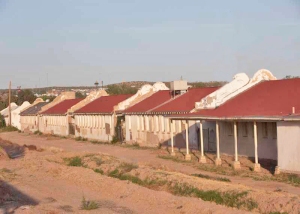 John died. Renamed Rio Vista Farm, it housed the temporary base for a Civilian Conservation Corps, and it sheltered hundreds of homeless adults and children. It served from 1951 to 1964 as the reception and processing center for the Bracero Program, which brought Mexican laborers to work in the agricultural regions of the United States. Rio Vista accepted neglected and abandoned children in addition to indigent adults.

Edna Gladney, an early champion of children’s rights and better living conditions, moved with her husband to Sherman, and while on a campaign with the Sherman Civic League to inspect local meat markets and public restrooms, they discovered the deplorable conditions at the Grayson County Poor Farm. After writing a scathing article in the local paper about the poor farm being little more than a dumping ground for the poor, insane, handicapped, and children, she arranged for the Civic League to have a meeting with the Commissioners Court and the owners of the poor farm. She enlisted the aid of Civic League to clean and whitewash the facility. Then, she arranged to have the children transferred to the Texas Children’s Home and Aid Society in Fort Worth.

Kaufman County, whose last residents left the farm in the 1970s, has been preserving some of the structures on the remaining twenty-seven acres of the original facility with the intention of making it a heritage tourism destination and educational resource. The farm, which was opened in 1881, housed the local

One of the original buildings on the Kaufman County Poor Farm.

paupers who were expected to support themselves by working on the farm until they were financially able to leave or until they died. During the 1900 outbreak of smallpox, the poor farm served as the Epidemic Camp. A burial site on the property has been in use since the 1871 typhoid fever epidemic and continues to be the location for the burial of transients, inmates who die in jail, and persons who have been quarantined.

4 thoughts on “Going to the Poor House in Texas”