In 1527, six years after the Spanish conquest of Mexico, Alvar Núñez Cabeza de Vaca had not planned to become a historian when he set sail as the second in command of the Pánfilo de Narváez 600-man expedition. 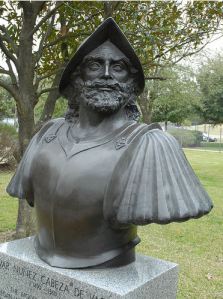 After desertions in Santa Domingo and a terrible hurricane in Cuba, the Spaniards spent the winter re-outfitting the expedition. About 500 Spaniards and five ships struck out again in April. Available maps of the Gulf of Mexico were so inaccurate that when they reached Florida’s west coast, Narváez, believing they were near the River of Palms in Panuco Province (present Tampico, Mexico), —a miscalculation of about 1,500 miles—ignored Cabeza de Vaca’s protests and put ashore an exploring party of 300 men and forty horses.

After slogging along the coast for a month, suffering from Indian attack and food shortage, they realized that they must return to the sea for their travel. The Spaniards’ lone carpenter guided the construction of five rafts using deerskin and hollow pieces of wood as bellows. They melted stirrups and bridle bits to cast primitive saws and axes for felling trees and shaping crude planks that they caulked with pine resins and palmetto fibers. They fashioned sails out of their shirts and trousers and wove rigging from the hair of horse manes and tails. They tanned the skin from the legs of horses to form bags for carrying fresh water. They fed themselves by killing a horse every third day. On September 22, 1528, they loaded fifty men on each raft and set out along the Gulf, remaining within sight of the shore.

Soon after passing the mouth of the Mississippi River, strong winds separated the rafts, eventually driving all ashore between Galveston Island and Matagorda Peninsula. About ninety Spaniards and at least one African slave named Estevanico landed two rafts west of Galveston Island on a beach Cabeza de Vaca soon named la Isla de Malhado (the Isle of Misfortune). The exhausted and starving men were terrified to see six-foot giants towering over them. Using sign language the Karankawas, who occupied the islands along the coast, indicated that they would return the following day with food. Cabeza de Vaca wrote that the next morning, after taking their fill of food and water, the Spaniards tried launching their rafts only to have them capsize and drown three men before tossing the others back onto the shore. When the Karankawas saw the terrific loss of men and all their possessions, Cabeza de Vaca said the Spaniards were stunned when these “crude and untutored people, who were like brutes,” sat down with the survivors and cried, weeping and wailing for half an hour.

Still believing they were close to the province of Panuco, four strong swimmers were sent ahead with an Indian guide. Over the winter Cabeza de Vaca observed the Karankawas, noting that when a child died the entire village mourned the loss for a full year. He observed this same sensitivity to everyone in their society except for the elderly, whom they viewed as useless, occupying space and eating food that the children needed. He also wrote that during the first winter, five Spaniards became stranded on the mainland. As they reached starvation they began eating one another until only one man was left. The Karankawas were revolted by the cannibalism and horrified that the Spaniards were so disrespectful of their dead that the survivors feared the Indians were going to kill them all. By spring 1529, exposure, dysentery, and starvation had decimated the wayfarers. Only Cabaza de Vaca and fourteen others had survived.

Cabeza de Vaca set out alone to explore inland, and became seriously ill. When he did not return as expected, he was given up for dead, and twelve of the survivors decided to move on down the coast toward Mexico. Two men refused to go because they could not swim and feared having to cross the waterways along the coast.

Meantime, Cabeza de Vaca recovered from his illness, and for almost four years he traded with the Indians, carrying seashells and sea snails to interior tribes, which they used to cut mesquite beans, in exchange for bison skins and red ochre, a dye prized for body paint by the coastal Indians. The natives gave him food in exchange for what they believed were his healing powers. He blew his breath on the injured or afflicted parts of the body and incorporated prayers and the Catholic practice of crossing himself, which he reported almost always made those receiving the treatment feel better. Each winter he returned to Malhado to check on the two survivors who steadfastly refused to leave.

In 1532, when one of the men on Malhado died, the survivor Lope de Oviedo, agreed to journey down the coast after Cabeza de Vaca promised to carry him on his back if they had to swim across streams. At Matagorda Bay a tribe Cabeza de Vaca called Quevenes threatened to kill them, which caused Oviedo to turn back with a group of native women and disappear. Despite their threats, the Quevenes told Cabeza de Vaca the names of “three Christians like him” and agreed to take him across the bay. Upon reaching the other side, he traveled to the “River of Nuts,” present Guadalupe and found three of his former companions being held as slaves, the other nine having died as they made their way along the coast.

For the next eighteen months the four endured slavery under the Coahuiltecans, always planning to escape at their first opportunity. During their captivity they heard stories of the fate of their expedition. Some had died of exposure and hunger; others succumbed to violence among themselves or from natives, and some of the survivors resorted to eating the flesh of their companions. In late summer 1534, they slipped away separately and headed toward the Rio Grande. Despite the odds, they soon met again and joined friendly Indians southwest of Corpus Christi Bay, where they remained for the next eight months.

They crossed the Rio Grande into Mexico near present Falcon Dam Reservoir, but upon hearing of hostile Indians along the Gulf coast, turned back across northern Mexico to the Gulf of California and the Pacific Ocean. Four men out of the original 300 reached Mexico City in July 1536, almost eight years after setting foot on the Florida Gulf coast.

Cabeza de Vaca had not completed his service to the crown. He was assigned the governorship of present-day Paraguay in Central South America. His experience in Texas, despite mistreatment and slavery, had made him a champion of the native people. When he tried to initiate policies that would help the local tribes—removing Indian slaves from cruel masters and placing them with kinder owners, instituting restrictions against holding Indian women as concubines, and adding modest taxes, settlers determined to exploit the native population removed him from office and sent him back to Spain in chains.

During his six-year trial, conviction, and his subsequent pardon, Cabeza de Vaca wrote Relación (Account), his detailed description of his Texas experiences as merchant, doctor, ethnologist, historian, and observer of plants and animals. He recorded Native American’s incest taboos, dietary habits—spiders, ant eggs, worms, lizards, and poisonous vipers—when nothing else was available, and methods used for insect repellent. He even recorded his profound distaste for sodomy among the hunting and gathering culture. His description of the buffalo was the first written account of those wild creatures.

Cabeza de Vaca died about 1559, but his extraordinary adventures and his detailed documentation have earned him the title of Texas’ first historian. He performed one other amazing task as he and the other castaways walked barefoot across Mexico. His description of removing an arrowhead lodged in the chest just above an Indian’s heart earned Cabeza de Vaca fame as the “Patron Saint” of the Texas Surgical Society.