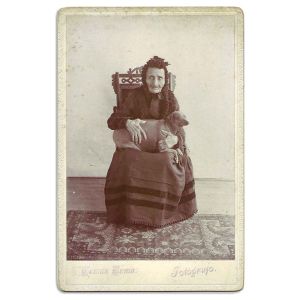 She lived well past 100—some say 105, others say 113. She claimed to have entered the Alamo to nurse the ailing James Bowie whose family accounts say he was suffering the fevers of typhoid. She even wore a scar on her chin acquired from the thrust of a Mexican bayonet as she threw herself across Bowie, pleading that a sick man should not be killed. Despite a lack of records to prove her account, most historians believe that Andrea Castañón Villanueva (Madam Candelaria) was actually there during the battle.

She grew up in Laredo, and arrived in San Antonio about 1810 where she married Candelario Villanueva. Over the years she was known to have raised four of her own children and twenty-orphans. She nursed the sick, which added merit to her story of nursing Bowie, and she gave to the poor.

In an account titled “Alamo Massacre” in the San Antonio Light, February 19, 1899, Madam Candelaria said that she and her husband were innkeepers in San Antonio where residents came after a big street celebration welcoming David Crockett to continue with a supper, singing, story-telling and drinking. Madam Candelaria’s descendants claim there is evidence that fandangos, known for good music and dancing, were held at the inn and that Madam Candelaria cooked for the occasions.

Over the years after the fall of the Alamo, Madam Candelaria shared her account with all who came to hear, saying that although they all knew that they were doomed, they continued to hold the bare hope that General Sam Houston would send reinforcement. She described sand bags piled against the great front door and the constant thunder of the cannons during the thirteen-day siege. She said the morning of March 6 they heard the degüello (the bugle call signifying no quarter) and they knew what was in store for them. William Travis was the first to die where he stood along the southeast wall near the present location of the Menger Hotel.

Crockett had come frequently to the bed of the ailing Bowie to keep him informed, and finally he loaded Bowie’s rifle and laid a pair of pistols by his side. Madam Candelaria heard Crockett say, “Boys, aim well,” just before the earth shook with the fierce yelling and the storm of bullets raining down. Crockett fell while trying to reload. Bowie emptied his pistols into the group of Mexicans who stormed into his room, and despite Madam Candelaria’s pleas for his life, she said Bowie “was butchered” before her eyes.

When the massacre had ended and she stepped on the floor of the Alamo, blood ran into her shoes.

In 1891, fifty-five years after the fall of the Alamo and eight years before Madam Candelaria died, the Texas legislature granted her a pension of twelve dollars a month for being a survivor of the Alamo and for her work with smallpox victims in San Antonio.