School children often read that Jane Long was the “Mother of Texas.”  She was a courageous woman who followed her husband as he 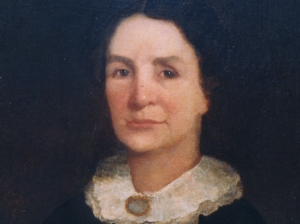 led a group of filibusters intent on freeing Texas from Spanish rule.  However, many Native American, Mexican, and several English-speaking women came to Texas before Jane Long arrived in 1819.  Born in 1798, the youngest of ten children, Jane Herbert Wilkinson lost both her parents by the time she was thirteen.  She lived with her sister on a plantation near Natchez, Mississippi, where she met the dashing James Long after he returned from the battle of New Orleans. They married before her sixteenth birthday, and for several years James Long practiced medicine, operated a plantation, and worked as a merchant in Natchez

James Long and many of the residents in the Natchez area were unhappy over the Adams-Onís Treaty, in which Spain gave Florida to the United States in exchange for the boundary of the Louisiana Purchase being drawn at the Sabine River.  Originally they expected, and even Thomas Jefferson stated, that the boundary should be the Rio Grande, which would have made Texas part of the United States. Citizens of the United States had already made several filibustering attempts to wrest Texas from Spain, when James Long in 1819 was named commander of an expedition financed by subscriptions totaling about $500,000.  Over 300 young men volunteered, expecting to receive a league of Texas land in exchange for their service.

When James Long left for Texas, Jane was expecting a baby and remained behind with their eighteen-month-old daughter, Ann.  The second girl, Rebecca, was born on June 16 and twelve days later Jane left hurriedly with both children and Kian, her young slave girl. By the time they reached Alexandria, Louisiana, Jane was sick.  She left both children and Kian with friends and plunged on, finally reaching Nacogdoches in August.  The citizens of Nacogdoches had declared the independence of Texas, organized a provisional government, and named James Long its chief.  Supplies did not arrive as expected from Natchez, and Long made a fruitless attempt to persuade the pirate Jean Laffite, who occupied Galveston Island, to provide supplies and men for the expedition.  Finally in October Spanish authorities sent more than 500 troops to Nacogdoches to drive the Long Expedition out of Texas.

As they fled to Louisiana, the Longs learned their baby, Rebecca, had died. Undeterred by his failure, Long organized a new expedition and by March 1820, he took Jane, their daughter Ann, and the slave girl Kian with him to Bolivar Peninsula, a spit of land extending into Galveston Bay across from the eastern end of Galveston Island.  Long organized his forces at Fort Las Casas on Point Bolivar and apparently continued to court the elusive Jean Laffite.  In later years, when Jane recounted her experience on Bolivar Peninsula, she claimed that she dined privately with Laffite in an effort to get his support for her husband’s expedition.  She also said that she made a flag, which she called “the lone star” for Long’s troops to carry with them.

Finally in September 1821, Long and fifty-two men sailed to La Bahía (present Goliad) with plans to capture the town.  In the meantime, Mexico had won its independence from Spain and had no intention of allowing citizens from the United States to capture Texas.  After holding La Bahía for only four days, Mexican forces overpowered Long’s troops and they were taken as prisoners to Mexico City where Long was killed about six months later.

Jane, who was expecting another baby, promised James that she would wait with several others families at Fort Las Casas on Bolivar Peninsula.  After a month of waiting for Long and his men to return, the food supplies began running low, and the Karankawa Indians in the area were becoming increasingly unfriendly.  The families began to leave, but Jane insisted on waiting for her husband until she, her daughter Anne and Kian were all that remained at the fort. With the help of Kian, Jane gave birth to daughter Mary James on December 21, 1821, at a time when it was so cold that Galveston Bay froze.  In early 1822, as their food supply dwindled to almost nothing, an immigrant family arrived, and Jane reluctantly moved with them up the San Jacinto River.  That summer she received word that James Long had been killed.  She returned to Louisiana, but after Mary James died in 1824, Jane Long returned to Texas and received a league of land in Stephen F. Austin’s colony. Family tradition says that Jane was courted by many of Texas’ leaders including Stephen F. Austin, Sam Houston, Ben Milam, and Mirabeau B. Lamar, but she refused all their proposals, apparently remaining loyal to James Long—the love of her life.

After living several years in San Felipe, the headquarters of Stephen F. Austin’s colony, she opened a boarding house in Brazoria.  The Bolivar Peninsula Cultural Foundation, which maintains Jane Long’s memorabilia, states that Jane held a ball at her boarding house in Brazoria when Stephen F. Austin returned in 1835 from prison in Mexico.  It was at the ball that Austin made his first speech favoring Texas independence from Mexico.  The foundation claims that during the Texas Revolution in 1836 Jane fled Brazoria ahead of the advancing Mexican Army and that she saved the papers of Mirabeau Lamar, which included his original history of Texas.

In 1837, at the age of thirty-nine, Jane Long moved to her league of land, part of which she sold to developers for the town of Richmond.  She opened another boarding house and ran a plantation with the help of twelve slaves.  At the beginning of the Civil War, she had nineteen slaves and 2,000 acres valued at $13,300. After the Civil War, she worked her land with tenant farmers.  When her daughter Ann died in 1870, the value of Jane’s estate had diminished to $2,000.  Jane Long died at her grandson’s home on December 30, 1880.

Today, the Bolivar Peninsula Cultural Foundation has dedicated a Jane Long Memorial on Bolivar Peninsula, which consists of a monument, Texas historical markers, and three flags—the United States, the Texas, and the Jane Long flag. 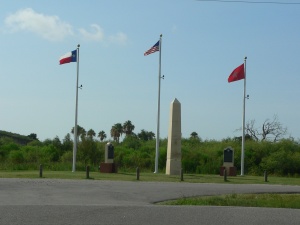