Despite the glorious story of Texas winning its independence from Mexico in that eighteen-minute battle at San Jacinto on April 21, 1836, the new republic remained embroiled in a series of political, economic, and military struggles.  The Black Bean Episode was the culmination of all those forces coming together for a grand failure.

Although Santa Anna lost the war for Texas Independence, he regained favor with the Mexican people in 1838 and won the presidency. (Watch this site next week for a review of Santa Anna and his amazing ability to return to power.) One of Santa Anna’s generals sent a warning to Texans in January 1842 of an impending attack if they continued insisting on their independence.  The following March, Mexican troops invaded Goliad, Refugio, and Victoria. By the time they reached San Antonio, the frightened populace had abandoned the city.  The Mexicans withdrew, but they left the settlements along the western edge of Texas in panic, demanding that President Sam Houston send an army into Mexico to halt the attacks.

Sam Houston, anxious to avoid another war and work instead toward building a strong republic, understood the political challenges and reluctantly made appeals to the United States for money and volunteers in preparation for an invasion of Mexico.  The needed assistance from the United States never arrived. On September 11, 1842, Gen. Adrián Woll, with 1,200 Mexican troops, captured San Antonio. Texans gathered at nearby Salado Creek to drive out the raiders, and while they were making headway in a pitched battle, less than two miles away a disaster was taking place.  When word had spread of the need for Texan support at San Antonio, Capt. Nicholas M. Dawson had raised a company of fifty-three men from the La Grange area.  On September 18, Dawson’s men rushed headlong into battle with Mexican cavalry patrols only to be overpowered by a column of 500, reinforced by two cannons.  When the cavalry pulled back and opened fire with the cannons, Dawson’s men were completely overpowered.  Despite trying to surrender, survivors claimed the Mexicans continued firing.  By the time the fight ended in late afternoon, thirty-six Texans were dead, fifteen were taken prisoner, and two escaped.  The dead were buried where they fell among the mesquite trees.  The survivors were marched to Perote Prison near Mexico City and only nine finally returned to Texas.

After what became known as the Dawson Massacre, Sam Houston finally called on Alexander Somervell, a customs officer from Matagorda Island, to organize a volunteer militia to punish the Mexican Army for the attacks.  Somerville raised a force of 700 young men who were eager for revenge, for adventure, and for plunder.  The expedition left San Antonio at the end of November 1842 and captured Laredo on December 7.  Finding a town with little wealth to plunder, the men ransacked Laredo.  Somerville, who had not been especially eager for the expedition, realized he was losing control of his command, and that they would be facing a much better trained and stronger Mexican Army as they marched south.  On December 19, he ordered his men to disband and head home.  A group of 308 Texans, including five captains, ignored Somerville’s command and under the leadership of William S. Fisher, continued their march down the Rio Grande.

Crossing the river to Ciudad Mier, the Texans battled all Christmas Day and into the night against a much larger Mexican force before finally surrendering. As captives, the Texans began the long march south toward prison in Mexico City. On February 11, 1843, the Texans overpowered their guards and in an effort to avoid capture fled into the arid mountains of Mexico, only to suffer for six days without food and water. When the Mexican troops rounded up the starving Texans, orders came from an infuriated Santa Anna to execute each of the 176 captives. It is unclear how Santa Anna was convinced to change his mind and decree instead that one in every ten should be executed.

“The Drawing of the Black Bean” by Frederic Remington.

officers were required to be the first to draw, then the selection proceeded in 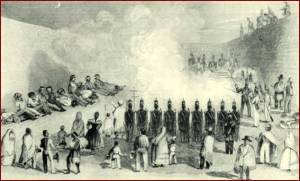 Those who drew Black Beans faced a firing squad.

alphabetical order.  The seventeen men who held black beans were executed before a firing squad.  The other prisoners eventually reached Perote Prison outside Mexico City.  Over time, some escaped, others had family and friends who arranged their release, and some died of illness and starvation.  Finally, on September 16, 1844, Santa Anna ordered the release of the remaining 104 Texas prisoners.

In 1847, while the United States Army occupied northeastern Mexico during the Mexican-American War, Captain John E. Dusenbury who had drawn a white bean, returned to the burial site of his comrades who had drawn black beans.  He exhumed the remains and carried them by ship to Galveston and then by wagon to La Grange. The citizens of La Grange retrieved the remains of those who had died in the Dawson Massacre and reinterred all the fallen in a common tomb housed in a cement vault on a high bluff overlooking La Grange.  Today, the gravesite is part of the Monument Hill and Kreische Brewery State Historic Sites. 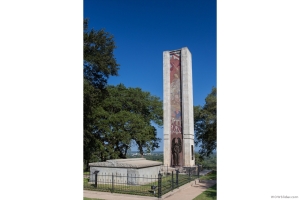 Monument to the fallen in the Dawson Massacre and the Black Bean Episode.

4 thoughts on “The Black Bean Episode”