Growing up in Weatherford, twenty-five miles west of Fort Worth, Mary Virginia Martin was a mimic—dancing and acting like Dick

Powell’s co-star, Ruby Keeler and singing like the crooner Bing Crosby.  Martin’s mother, a violin teacher, had planned to have a son in 1913. Instead, her lively little girl became the family’s tomboy, romping and playing in the orchard and barn and riding ponies with her older sister Geraldine.  She claimed in her autobiography My Heart Belongs to have had an idyllic childhood, and that her photographic memory made it easy to memorize songs and remember the answers for school exams.  She performed her first solo in a fire hall and remembered soaking up the crowd’s admiration. Then, she sang with a trio of little girls dressed like bellhops on the town’s bandstand right outside the courthouse where her father used his powerful voice to present his law cases.  She realized her voice was powerful, too, because even without a microphone it rang out across the town square.

She enrolled in Ward-Belmont, a strict finishing school in Nashville, Tennessee, where entertaining the other girls with imitations of Fanny Brice was not enough to assuage her homesickness, especially for Benjamin Hagman.  She and Hagman convinced her mother, who was the family disciplinarian, to allow them to marry.  As it turned out, marriage and expecting her first child (Larry Hagman, future J.R. Ewing in Dallas) at seventeen was not the dream she had imagined.  Following her sister’s suggestion, she opened a dance school in nearby Mineral Wells and embarked on a series of choices that finally propelled her into stardom:  She divorced Hagman, left her son in Weatherford, and headed to California to study dance.  Over the next two years she became known as “Audition Mary” for never missing a chance to sing or dance for a job.  She took whatever work she could get including a stint at theaters in San Francisco and Los Angles singing “So Red Rose”—from the wings of the theaters.  After Oscar Hammerstein II, whom she did not recognize, heard her sing “Indian Love Call,” he told her she had something special.  Since she could not break into the film industry, she went to New York for a role in a play that never opened.  Finally, in Cole Porter’s production of Leave it to Me she captured the audiences with the song, “My Heart Belongs to Daddy.”

The media attention opened the door to Hollywood in 1939, and over the next three years she starred in ten movies.  Radio performances included Good News of 1940 and Kraft Music Hall. In 1940 she married Richard Halliday, an editor and producer at Paramount, who became her manager.  She won the New York Drama Critics Poll for her role as Venus in One Touch of Venus.  She contributed ideas for the songs and choreography for her role as Ensign Nellie Forbush in the 1949 Rodgers and Hammerstein hit South Pacific.  Over the next ten years, she performed on stage and television in Skin of Our Teeth and Annie Get Your Gun, however she said that her favorite role was that of Peter Pan that ran briefly on Broadway and then repeatedly on NBC-TV. 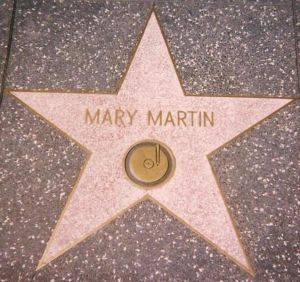 Star for “Recording” on Hollywood Walk of Fame. She also has a star for “Radio.”

Martin claimed many awards including Tony Awards for Peter Pan, for her portrayal of Mary Rainer in The Sound of Music, and for her role as nurse Nellie Forbush in South Pacific. She was presented with a special Tony in 1948 “for spreading theatre to the rest of the country while the originals perform in New York,” and she received the annual Kennedy Center Honors in 1989 for career achievement.  Although she is credited with fifteen films and fourteen television performances, Martin said she preferred the “connection” she felt with a live theater audience.  She is credited with twenty-two stage productions.

Mary Martin died of cancer on November 3, 1990, and is buried in her hometown of Weatherford, Texas. 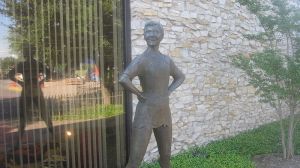