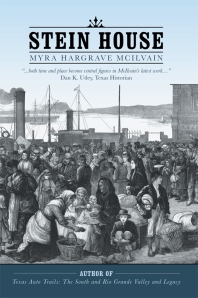 December 1844 on a bare shell beach that developed into the thriving seaport of Indianola. The blog posts have been an introduction to the exciting history of the place where Stein House, my latest historical novel, opens in 1853 as Helga Heinrich and her four children sail into Indianola to begin their new life.  They are determined to overcome the memory and haunting legacy of Max, her husband and their papa, who drowned in a drunken leap from the dock as their ship pulled away from the German port.

Helga is anxious to be reunited with her sister Amelia, and she’s grateful her wealthy brother-in-law, Dr. Joseph Stein, fulfills his part of the bargain that brought the family to the new world, even without Max to run Dr. Stein’s mercantile store.  Helga takes charge of Stein’s massive boarding house overlooking the road to Texas’ interior and the fickle waves of Matagorda Bay.

A woman of strong passions, Helga operates Stein House for boarders of all stripes whose involvement in the rigors of a town on the edge of frontier influences and molds all their lives: the cruelties of yellow fever and slavery, the wrenching choices of Civil War and Reconstruction, murder, alcoholism, and the devastation wrought by the hurricane of 1886.

The following is an excerpt taken from the first chapter as Helga and her children walk with Amelia to their new home:

A crowd had gathered in front of an impressive white two-story building.  A sign over the door read Casimir House.

Amelia whispered, “Let’s cross to the other side.  It’s a slave auction.”

Helga’s breath caught, and she stood transfixed, staring at a black boy, not more than ten, chained by his ankle and wrist to a giant black man.  Both slaves had been oiled until their flesh shined like polished ebony, outlining every detail of their muscles.

“They look so strong.” Hermie spoke barely above a whisper. “Have you ever seen such muscles on a boy?’

Helga had not.  The child’s massive shoulders bulged under the faded, sleeveless shirt, his powerful arms hanging loosely at his sides, seemingly waiting for the next command.  She looked down at the round softness of Hermie and Paul.  How could she think their life was hard?  Yet in this new land she intended to see their lives improve.

Suddenly the crowd parted, and Helga recognized the top of Anna’s blonde head as the child stepped onto the porch and very lightly stroked the black, manacled hand of the boy.  The contact made the boy jump—the only indication of his fright.  The crowd burst into merry laughter as Anna examined her fingertip for color.

Helga pushed her way into the throng and took Anna firmly by the hand. “Please forgive her,” she whispered, her eyes riveted to the black child’s steady gaze.

The amused spectators patted Anna’s head and made comments about the lovely little German lass until the auctioneer began chanting excitedly.  Almost immediately, the bidding reached a fever pitch.

Gretchen said, “Is that man selling those people?”

“It’s legal.  A few locals use slaves as domestics.  Mostly, they’re sold to planters who take them upriver.”  Amelia kept her voice low.

Helga couldn’t speak.  She clutched Anna’s hand and stared at the boy, who continued to look into her stricken face, his eyes bold and defiant, so little remaining of the child within that fully developed body.

We must go.  You don’t want to see them taken away.” Amelia tugged at Helga’s arm.

“I’ve got to see where he goes,” Helga whispered.

A planter stepped forward wearing a big, broad-brimmed hat and a green satin vest that made his stomach bulge like he was about to strut at the head of a parade.  He paid an amazing $900 for the boy and $1,200 for the man.  The auctioneer nodded dismissively at the slaves, who trotted behind the planter in a rhythm that kept them from entangling their jangling chains.  With one smooth motion, both black bodies heaved themselves into the back of a wagon.  It creaked slowly away, the older slave glaring sullenly into the upturned faces, the boy continuing to stare over the crowd at Helga.

Amelia pulled at Helga’s arm.  “Come.  You can make yourself sick over something you can’t change.”

Anna tucked her finger protectively into the fold of her skirt.

You may order Stein House here to read the rest of the story of this family as they settle into the life of this bustling seaport that rivaled Galveston until two hurricanes finally created a ghost town.

Next week, I will return to my regular Texas history tales.

7 thoughts on “Stein House is Published”