Just before Christmas in 1926, Rebecca Bradley, a twenty-one-year old student at the University of Texas in Austin, decided to rob banks to pay her college tuition.  First, she set fire to a vacant house near downtown Round Rock and rushed into the nearby bank thinking the employees would be distracted by the blaze.  When that plan failed, she drove south of Austin to the Fa 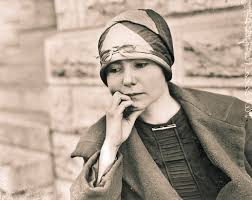 rmers National Bank in Buda and pretended to be a newspaper reporter as she made careful notes while interviewing local farmers about their crops and government policies.  She secured perm

ission to use the bank’s typewriter inside the teller’s cage.  After a time, she pulled a .32 automatic, herded both employees into the walk-in safe and fled with $1,000 in five-dollar bills.  Her Ford Model T coupe got stuck in the mud on the way back to Austin; the bank employees used a screwdriver to jiggle their way to freedom; and by the time she reached home she was arrested.

Newspapers across the country went nuts reporting on the pretty little coed who they dubbed the “flapper bandit.”  Rebecca’s story soon emerged.  With the help of a student loan and part time jobs she had earned a bachelor’s degree in history and was beginning a master’s degree program when her mother became ill and moved to Austin to live with Rebecca.  To further complicate matters, Rebecca had been secretly married for a year to her high school sweetheart Otis Rogers, a UT law student who could not afford to care for his wife and her mother.

Rebecca worked for a university professor who managed the business affairs for the Texas State Historical Association (TSHA) and planned to be away during the summer of 1926.  In his absence and apparently thinking Rebecca would be eager to bring in new members, he allowed Rebecca to keep $1.40 of the $3.00 membership dues she collected.  She jumped into the new opportunity, used personal funds to hire secretaries to send membership invitations to thousands of names, and ended up overwhelmed by poor record keeping and errors that resulted in her owing over $1,200 to the TSHA.  In the meantime she went to work as a secretary for Texas Attorney General Dan Moody who was elected governor in November 1926.

Justice ground forward as a witness in the arson trial testified to seeing Rebecca enter the vacant house and leave again just before the fire erupted.  The jury could not agree on a verdict.  The December 1927 trial for the bank robbery resulted in a conviction and maximum sentence of fourteen years.  Finally, her husband Otis Rogers joined the defense team that won an appeal and after lengthy legal wrangling she was granted a new trial.  While many professionals wondered at the sanity of a young woman who would rob a bank, her husband actually argued that she was insane at the time of the robbery.  One account claims that he pleaded passionately for the court to “hang her high or send her to the electric chair” instead of allowing her to suffer in prison.  Again, a hung jury failed to convict.  Before it all ended in September 1929, Rebecca Bradley Rogers had been tried four times for either arson or armed robbery.

Later, the sheriff reported that as he and Rebecca drove through Buda she laughed and said, “I have a whole lot to live down, but not as much as those men back there who let a little girl hold them up with an empty gun.”

Rebecca Bradley Rogers became a free woman the day before she gave birth to their first child.  She and Otis moved to Fort Worth where he became a successful criminal attorney with Rebecca serving as his legal secretary.

One thought on “Flapper Bandit”