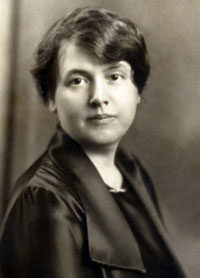 After Minnie Fisher graduated at the age of nineteen with a degree in pharmacy from the University of Texas Medical School in Galveston, she discovered on her first job that she did not earn half the wages of the less-educated male employees.  She claimed the memory of that experience in 1901 led to her life’s work of championing the status of women.

Minnie Fisher married lawyer and insurance executive Beverly Jean (Bill) Cunningham in 1902, moved to Galveston and began volunteering in local, state, and national women’s suffrage organizations.  She honed her speaking skills by touring the country urging the passage of equal rights for women and universal suffrage.  Cunningham moved to Austin in 1917 and opened the state suffrage headquarters near the capitol.  A vote in January 1919 by the Texas state legislature granting full suffrage to women failed when the referendum went before the voters.  Then, the United States House of Representatives on May 21, and the United States Senate on June 4, passed a joint resolution on the Nineteenth Amendment.  Immediately Cunningham began campaigning to secure ratification by the Texas state legislature.  On June 28, 1919 Texas became the first southern state to ratify the Nineteenth Amendment to the United States Constitution granting women the right to vote.

Cunningham joined a national tour of ratification supporters saying later that she “pursued governors all over the west” urging their states to ratify the amendment.  Finally, on August 26, 1920, Tennessee became the thirty-sixth state out of the existing forty-eight to bring the total to the required three-fourths of the states necessary to amend the constitutional. 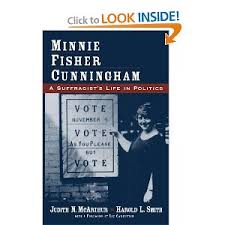 Rise of a Public Woman, Suffragette’s Life in Politics

Cunningham helped organize the League of Women Voters (LWV) in 1920 and served as its executive secretary. Twenty years later Eleanor Roosevelt recalled that when she heard Minnie Cunningham speak at the LWV’s second annual convention, the speech made her feel “that you had no right to be a slacker as a citizen, you had no right not to take an active part in what was happening to your country as a whole.”

Cunningham worked for an act in 1921 designed to lower infant mortality rate and for an act in 1922 that allowed women to have citizenship based solely on their own status and not the status of their husbands.  In 1924 Cunningham experienced another eye-opener, this time regarding the need for women to get more involved in partisan politics.  Eleanor Roosevelt invited Cunningham to join the Democratic Women’s Advisory Committee to the Democratic National Committee (DNC) where Cunningham found that despite the DNC authorizing the women’s group, it refused to meet with them.  Cunningham managed to gain access to the platform committee only because of her membership in the LWVs.

In 1928 Minnie Fisher Cunningham became the first woman in Texas to run for the United States Senate.  In an effort to raise the status of women among the electorate, she ignored her colleague’s advice to assume a combative style that had colored past elections, and ran on a platform of issues advocating prohibition, tax reform, farm relief, cooperation with the League of Nations, and opposition to the Ku Klux Klan.  She lost in the state’s primary.

Working in College Station as an editor for the Texas A&M Extension Service, Cunningham became interested in the link between poverty and poor nutrition and advocated alongside the Texas Federation of Women’s Clubs to enrich flour with basic vitamin and mineral content.   In 1938 she organized the Women’s Committee for Economic Policy (WCEP), which worked for a fully funded teacher retirement system.  While working in Washington for the Agricultural Adjustment Administration, President Roosevelt began calling her “Minnie Fish,” a title she carried for the rest of her life.

Returning to Texas in 1944, Cunningham ran for governor in an out-spoken campaign against Coke Stevenson. To raise money for her filing fee, she sold lumber from the trees on her old family farm in New Waverly and Liz Carpenter served as her press secretary.  Cunningham lost the primary, coming in second in a field of nine.

When the University of Texas Board of Regents began in the 1940s firing professors as suspected Communists and then dismissed the university president for refusing to go along with the charges by claiming he had not disclosed a “nest of homosexuals” among the faculty, Cunningham created the Women’s Committee for Education Freedom to stand up to the regents.  She helped organize groups to support the New Deal policies and worked tirelessly for Democratic candidates such as Harry Truman, Adlai Stevenson, and Ralph Yarborough.

Cunningham received a guest invitation to the inauguration of President John F. Kennedy in appreciation for her work in helping him carry her predominately Republican Walker County.  She financed the campaign in her county through the sale of used clothing.

Despite declining health Cunningham continued working for policies that benefited women and improved the lives of all the citizens of Texas.  She died of congestive heart failure on December 9, 1964.

4 thoughts on “Minnie Fisher Cunningham Paved the Way for Today”