In 1855, German immigrants William and Mary Menger built a one-story boarding house and brewery on the dusty plaza next to the Alamo.  A sheep pen (where Rivercenter Mall now stands) served as the Menger’s other neighbor.  Mary’s cooking and William’s beer proved so popular that local hacks picked up guests at Main and Military plazas and brought them to dinner.  Travelers arrived by stagecoach from New Orleans and California.

Within four years, the Mengers erected a two-story stone hotel on the site, and other additions followed.  Prominent military personnel stationed at or visiting nearby Fort Sam Houston—such as generals Ulysses S. Grant, Robert E. Lee, and John Pershing—frequented the Menger.  Poet Sidney Lanier praised the atmosphere and many of O. Henry’s characters in his short stories had dealings at the Menger. 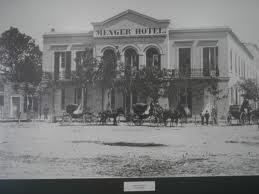 In 1876, before John Bet-A-Million Gates made his first million, he set up a barbed wire fence in Alamo Plaza in front of the Menger and filled it with Longhorn cattle to demonstrate to the skeptical, big time ranchers who stayed at the Menger that barbed wire would hold the restless cattle.  The performance proved so successful that orders for barbed wire poured in with such fury that the company Gates represented had trouble meeting the demand.

Theodore Roosevelt stayed at the Menger first in 1892 while on a javelina hunting trip.  The hotel’s famous solid cherry bar with its French mirrors and gold plated spittoons is a replica of the taproom in the House of Lords Club in London and is touted as the locale where Roosevelt in 1898 recruited the First United States Volunteer Cavalry, the regiment known as the “Rough Riders” of the Spanish-American War.

The Menger’s Colonial Dining Room grew famous throughout the southwest for its wild game, mango ice cream, and snapper soup made from the turtles caught in the San Antonio River. 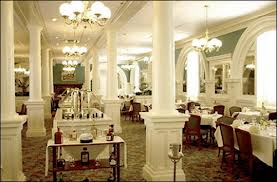 The hotel grew until it eventually encompassed the entire block, changing to Kampmann family ownership and then to the Moody family interests.  Through the years, each owner added to the charm of the prestigious structure.  The Menger remains part of San Antonio’s heritage from the days the city was known as the “Paris of the Wilderness.”