After the Civil War, Waco was a struggling little town of 1,500 nestled on the west bank of the Brazos River.  No bridges crossed the Brazos, the longest body of water in Texas.  During floods, days and even weeks passed before travelers as well as cattle on the Shawnee and Chisholm trails could safely cross the river.  Although money was scarce and times were hard during recovery from the war, a group of businessmen formed Waco Bridge Company and secured a twenty-five-year contract to construct and operate the only toll bridge for five miles up and down the river.

John A. Roebling and Son of New York designed the 475-foot structure, one of the longest suspension bridges in the world at that time.  Waco’s bridge served as the prototype for Roebling’s much-longer Brooklyn Bridge completed in 1883.

The fledgling Waco company ran into problems from the beginning.  Work started in the fall of 1868 with costs, originally estimated at $40,000, growing to $140,000 as the investors continued to issue new stock offerings.  The nearest railroad stopped at Millican, over 100 miles away, which meant that coils of wire and cable, steel trusses, and custom-made bolts and nuts had to be hauled to Waco by ox wagon over rutted, sandy roads.  The contractor floated cedar trees down the Brazos for shoring up the foundation in the unstable riverbed.  Local businesses made the woodwork and the bricks.

The bridge opened to traffic in January 1870 with tolls of ten cents for each animal and rider; loose animals and foot passengers crossed for five cents each; and sheep, hogs, or goats crossed for three cents each.  It was not long until residents on the far side of the river began complaining about the tolls.  Businessmen who used the facility joined them in their protests.

Landowners along the river began allowing cattlemen, travelers, and local citizens to cut across their property to reach the fords on the river.  The uproar increased for the next nineteen years, until September 1889, when the Waco Bridge Company sold the structure to McLennan County for $75,000 and the county gave the bridge to the city.

Vehicles continued using the bridge, without paying a toll, until 1971 when it was converted to a pedestrian crossing.  Today lovely, shaded parkland edges both sides of the river and the bridge enjoys a listing on the National Register of Historic Places and designation by a Texas Historical marker. 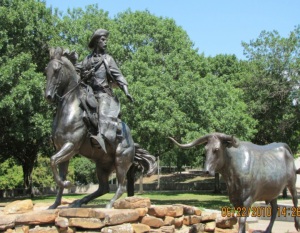