The railroad and visionaries like Sam Robertson deserve much of the credit for development of the Rio Grande Valley of Texas.  Before arrival of the railroad, the Valley was a no man’s land.  Towns such as Brownsville and Matamoros, Mexico, relied on the Rio Grande and the Gulf of Mexico for access to the outside world.  Overland travel from Brownsville to Corpus Christ took days of slogging through the vast jungle of mesquite, cactus, chaparral and brush-covered country.

In 1903, as Robertson fulfilled a contract to lay the first rails from Corpus Christi to Brownsville, he noticed the peculiar topography of the area along the Rio Grande looked much like that of the Nile River—higher by several feet than the surrounding landscape.  Unlike other river valleys that drain into nearby streams, years of flooding left behind silt, resulting in the Rio Grande flowing at a higher level than the surrounding terrain—an ideal situation for harnessing the water for gravity irrigation into the fertile land along its banks.  Robertson also observed dry riverbeds left behind after the Rio Grande flooded and then changed coarse as it  cut new channels.  Locally known as resacas, the dry canals twisted through the area north of Brownsville offering readymade irrigation potential. 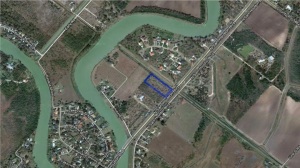 Robertson convinced local investors to join him in purchasing 10,000 acres to begin land development, and laying out the town of San Benito along one of the curving resacas.  They cut a canal from the Rio Grande to introduce irrigation water into the dry resacas and began selling land to northern farmers looking for new opportunities in the Rio Grande Valley.

The farmers, forced to rely on horses, mules, and dirt roads to get their produce to market, preferred land next to the railroad.  In 1912 Robertson decided to take the railroad to the farmers and began constructing the San Benito and Rio Grande Valley Railroad.  Soon all the spurs and intricate network of lines snaking across the valley became known as the Spiderweb Railroad, and the train that traveled the route became known as the “Galloping Goose” for the frequency with which it jumped the track, forcing passengers to help lift it back on the rails.

Making two round trips daily at a grand speed of fifteen miles per hour, the train picked up both passengers and freight.  Many farmers built tiny loading platforms beside the track, while others merely flagged the engineer to take on travelers or a few bushels of produce.

By 1924 the Missouri Pacific took over the line, but the little railroad, whose track never extended beyond 128 miles, had served an important role in opening the rich Rio Grand Valley to worldwide markets.

Upon Robertson’s return to San Benito, he embarked on his final grand scheme—developing Padre, the barrier island paralleling Texas’ southern shore, as a resort community. He built a “trough” causeway (see photo) from the northern end of Padre to the mainland near Corpus Christi.  A trestle supported four parallel troughs, wooden slots constructed wide enough to accommodate a standard car tire within its walls.  With automobile wheels set firmly in each trough, traffic flowed both directions across the causeway.

In his zeal to attract tourists, Robertson opened ferries at Port Aransas and at the south end of Padre Island.  Then, he built a hotel and four houses on the southern end of the island and a fifth house near the causeway on the north.

Although the unusual trough causeway boasted 1,800 cars the first month and 2,500 cars the second, interest began waning, after the 1929 Stock Market Crash.  By the next year, Robertson’s dream appeared doomed; he could not pay his debts.  He sold his interest in the development and must have watched in horror as the 1933 hurricane destroyed all the structures on and leading to Padre Island.