Stephen F. Austin fits the image of a reluctant father.  He came to Spanish Texas in response to his own father Moses Austin’s deathbed wish for Stephen to continue with Moses’ dream of settling 300 families in Texas.  Like many apprehensive fathers, Stephen F. Austin embraced his responsibilities and spent the remainder of his life lovingly guiding his colony and all of Texas toward the best opportunity for success.

Austin understood and admired the adventurous, hard-working settlers willing to move to a wilderness and carve out a new life because he grew up around the French Canadian, Spanish, and American mine workers in the primitive, lead mining towns his father founded in western Virginia and Spanish Louisiana (present Southeast Missouri).  Unlike Moses Austin whose quick temper and need to challenge those with whom he disagreed, Stephen embraced patience, tact, willingness to compromise, and the diplomacy necessary to work with the independent-minded settlers and the tangles of Spanish and Mexican government bureaucracy.

Stephen reached San Antonio in August 1821, secured authority to continue with Moses Austin’s colonization grant, and arranged for allocating 640 acres for each man, plus 320 acres for a wife, 160 acres for each child, and eighty acres for each slave at a cost of twelve and a half cents per acre to be paid to Austin for administering the surveys and expenses of establishing the colony.

Settlers eagerly grabbed the land offer as Austin scrambled to find financial partners.  From the beginning of his colony, Austin insisted all land grants be carefully recorded in bound volumes to preserve a permanent record—a wise decision in light of the news of Mexico finally winning its long battle for independence from Spain.

Austin left immediately for Mexico City, and after patient negotiation, the Mexican government established a new empresarial policy offering each married man a league of land (4,428 acres) and opened colonization to several more empresarios, agents like Austin who received permission to bring settlers into Texas.  The law denied empresarios the right to charge administrative fees, providing instead 67,000 acres for settling each 200 families. However, empresarios received their land only after settling all the families.  Selling the land proved difficult since colonists were getting free land.

Despite the loss of administrative fees and personal debts mounting as he bore more and more of the unforeseen costs of establishing the Austin Colony, by late 1825, Austin’s colony reached 300 families—known today as the “Old Three Hundred.”  Between 1825 and 1829, Austin settled an additional 900 families.

Dealing with the Mexican government required constant compromise.  The slavery issue presented a continuing challenge since most settlers came from slave-holding states and the original colonization law allowed them to bring their chattel into Texas.  When the new constitution of the state of Coahuila and Texas prohibited slave importation, an uproar spread through the colony.  Austin’s personal beliefs (he owned a slave woman he described as old and not worth anything) seemed to shift.  As with other issues he felt represented the best interest of the colonists, he negotiated a scheme allowing settlers to free their slaves at the Texas border and make them indentured servants for an indefinite time.

Recognizing the plight of many colonists who came to Texas without paying their debts in the United State, Austin secured a law closing the courts for twelve years to debt collectors and permanently exempting land, tools, and implements used in business and farming from creditors—an early version of the homestead exemption law.

Austin located his colony in fertile farmlands with access to transportation along the Colorado and Brazos rivers, and then lobbied the Mexican congress to legalize the port of Galveston and to allow trade through ports at the mouth of the Brazos and other rivers.

Despite Austin’s efforts to ease tensions between the differing cultures and remain aloof from Mexican government intrigues by encouraging the colonists to “play the turtle, head and feet within our own shells,” outside forces kept Mexican officials on the defensive.  Several offers from President Andrew Jackson for the United States to buy Texas resulted in an 1830 law halting further colonization by settlers from the United States.  Austin wrangled an exemption for his and for Green DeWitt’s colony, and by the next year succeeded in getting the law repealed.

However, when Haden Edwards, in an effort to win Texas independence from Mexico tried to drag Austin’s beloved colonists into the Fredonian Rebellion, Austin sent a militia to put down the revolt to save his settlers from the wrath of the Mexican government.

The colonists’ dissatisfaction with Mexican President Anastacio Bustamente’s heavy-handed immigration controls and introduction of tariffs finally led to Austin joining the colonists in supporting Antonio López de Santa Anna in Mexican presidential elections.  Santa Anna soon proved not to be the liberal leader of his campaign, but a dictator who clamped down on the increasingly independent-minded colonists.

Austin did not favor the conventions held in 1832 and 1833 to express Texan grievances, and believed they would not serve the colonists’ best interests, but he attended each event hoping to moderate the actions of the increasingly dissatisfied settlers.  Despite his efforts to temper the resolutions, the delegates, even those who disagreed with Austin, recognized his influence with the Mexican authorities, and elected him to present their petitions to the government in Mexico City.

Austin’s negotiations resulted in important reforms, but as he headed back to Texas, Santa Anna ordered him arrested and held until July 1835—an absence from Texas of twenty-eight months.  Without Austin’s calming presence, the war clouds in Texas grew beyond his control; strong factions organized a consultation to begin the process of declaring independence.  The consultation delegates selected Austin and two other men as emissaries to the United States to solicit loans and volunteers and arrange credit for munitions and other equipment, including warships.  They also charged the men with getting a commitment of recognition of Texas independence and eventual annexation to the United States.

By the time Austin returned to Texas in June 1836, the celebrated Battle of San Jacinto on April 21 had decisively won Texas war for independence from Mexico. 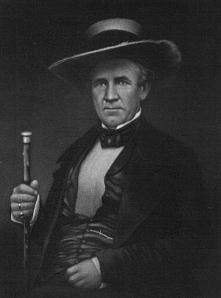 Austin “offered his services” as president of the republic in the September election, but it was not to be.  Sam Houston, the man who marched across Texas with the army, the flamboyant general who led the troops in the winning Battle of San Jacinto, won the contest.  President Houston appointed the quiet and unassuming Austin to the office for which he was well suited—Secretary of State.  Despite failing health and no money to heat his tiny office and living quarters, Austin worked diligently to set up the state department of the new Republic of Texas.

As he lay near death with pneumonia on December 27, 1836, he roused from a dream with these last words:  “The independence of Texas is recognized.  Didn’t you see it in the papers?”

Austin died at age 43 without knowing his beloved Texas, which he nurtured and guided with such patience, would become the twenty-eighth state to enter the Union, and that annexation would trigger the Mexican War (1846-48).  Like dominoes falling across the historic landscape, the Treaty of Guadalupe Hidalgo ending that conflict stretched the United States borders to the Pacific Ocean, adding nearly a million square miles and increasing the size of the nation by almost one third.

Land acquired after the Mexican War