After the Civil War, views differed about what should be done about the Southern Plains Indian’s often-vicious determination to keep their hunting grounds free of white settlement.  The Texas government wanted to see the Indians exterminated, while the federal government planned to move them to two reservations established in Indian Territory (present Oklahoma).

Two turbulent chapters in history came together in the 1870s to subdue and contain what the white man called the “Indian threat.”  The first transition followed the completion in 1869 of the Transcontinental Railroad, which opened the east coast and European markets to commercial shipment of buffalo hides from the Great Plains.  An avalanche of professional buffalo hunters swarmed onto the Southern Plains where tens of millions of buffalo grazed on the rich grassland.  The second upheaval, the Red River War, began in 1874 as a campaign of the United States Army to forcibly move the Comanche, Kiowa, Southern Cheyenne, and Arapaho tribes to the reservations in Indian Territory.

Bison sustained the life of the nomadic tribes who used every part of the buffalo for survival.  Hides provided housing and clothing; brains soften the buffalo skin; bones could be scraped into brushes and awls; hair made excellent ropes, stuffing, and yarn; sinew served as thread and bowstrings; and dung became fuel.  Every part of the animal, even the nose gristle, fetus, and hump contributed to the Indian diet.

Indians hunted with bows and spears, killing only the number of bison they needed for survival, whereas a good buffalo hunter made a stand downwind from a herd and could shoot as many as 100 in a morning and 1,000 to 2,000 in a three-month season.

The teams varied in size from one hunter and two skinners to large organizations of hunters, skinners, gun cleaners, cartridge reloaders, cooks, wranglers, and wagons for transporting equipment and supplies.  After skinning a beast, which weighed up to 2500 pounds and stood six feet tall at its shaggy shoulders, the men ate the delicacies—hump and tongue—sold what they could, and left the remaining carcass to rot on the prairie.  This careless slaughter almost completely exterminated the buffalo, and observing the demise of their livelihood infuriated the Indians. 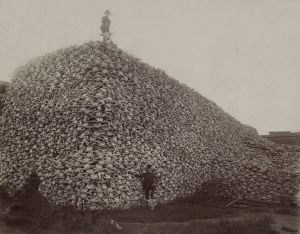 Charged with harassing the agile bands of Indians until they gave up and moved to the reservations, several army columns crisscrossed the Texas Panhandle searching for the Indians as they moved entire families to various campsites.  When the army units discovered a group of Indians, few casualties resulted, but the army destroyed the supplies and horses, slowly reducing the size and force of the roaming Indian population.

In this climate of search and destroy by the Army, coupled with Indian anger over destruction of the buffalo, in June 1874, Comanche Chief Quanah Parker and a spiritual leader named Isa-tai led 250 warriors in an attack on Adobe Walls, a small outpost of buffalo hunters in the Texas Panhandle.  The hunters, using large caliber buffalo guns, held off their attackers, but the violence surprised government officials.  As the warriors continued raiding along the frontier, President Grant’s administration authorized the Army to use whatever means necessary to subdue the Southern Plains Indians.

With firm directions from Washington, the Red River War began with a fury as five army columns swarmed across the Texas Panhandle from different directions. Colonel Ranald S. Mackenzie’s scouts found a large village of Comanche, Kiowa and Cheyenne hidden in their winter quarters on the floor of Palo Duro Canyon, a 6,000-foot-deep

At dawn on September 28, 1874, Mackenzie’s troops hurtled down the steep cliff wall, surprising the Indians who tried to protect their squaws and pack animals as they fled from the persistent army fire.  Nightfall found four Indians dead, 450 lodges burned to the ground, and the supply of buffalo meat destroyed.  The army rounded up 1,400 horses, kept all they could use, and shot the remaining.

Out of food and housing, without their horses, and facing winter, the Indians had no choice but to walk to the Fort Sill reservation.

The Red River War ended the following June when Quanah Parker and his band of Comanches—the last of the southwestern Indians–surrendered at Fort Sill.  The almost complete devastation of the buffalo and the persistent military attacks successfully ended the Indian presence on the High Plains and opened settlement to white farmers and ranchers.