When an old story comes from many sources, it is difficult to glean the exact details.  In this case, we know a man was scalped and lived to tell about it.

Farmers like Josiah Wilbarger and his wife who settled the west accepted the ever-present danger of Indians hostile to encroachment of the new arrivals.  Surveyors mapping the land grants for the early colonists faced an even greater threat because the Indians feared and hated surveyors, calling their compass “the thing that steals the land.”

In addition to farming his land, granted in 1832 a few miles east of the present city of Austin, Josiah Wilbarger worked as a surveyor.  Stories vary as to what Wilbarger and his four friends were doing out in the country in August 1833.  Most accounts say they were on a surveying trip and stopped near Pond Spring to have lunch.

The attack came suddenly as a large band of Indians swooped down with rifles and bows, killing one man, shooting another in the hip, and hitting Wilbarger in the calf of his leg.

As the men scrambled to mount their horses, they saw Wilbarger take another blow.  Some accounts say a bullet, others say an arrow struck Wilbarger in the neck as the Indians descended on him.  Whatever they saw, it convinced Wilbarger’s friends that he was dead.

The survivors raced several miles to the protection of the Reuben Hornsby home; planning to return the next morning for the bodies after the Indians finished their scalping ritual.  That night Mrs. Hornsby dreamed of Wilbarger sitting under a tree seriously injured.  She woke her husband who dismissed her as overreacting to all the excitement.  Mrs. Hornsby dreamed a second time, even recognizing the site where Hornsby lay naked.

It’s not clear when the men returned for Wilbarger.  Some say Mrs. Hornsby insisted they leave immediately; other versions claim the men waited until morning.  Either way, Mrs. Hornsby provided a blanket saying, “Take this to make a stretcher.  He’s not dead but he can’t ride.”

They found him as Mrs. Hornsby claimed, scalped and near death.  Placing his naked body on the blanket, they carried him back to the Hornsby’s where Mrs. Hornsby applied poultices of wheat bread and bear grease.

As Wilbarger grew stronger he told of how the arrow in his neck paralyzed him, making him unable to feel as the Indians hovered around obviously believing he was dead.  One man used his knife to carve around Wilbarger’s scalp and then snatched his hair so hard it sounded like a mighty clap of thunder as the flesh ripped from his head.

Continuing to feign death, Wilbarger waited until the Indians finished the other scalping rituals and left.  Some stories say Wilbarger pulled the arrow from his neck and passed out.  When he awoke, he was blazing with fever and crawled to the nearby spring to cool his pain-racked body.  He started to crawl toward the Hornsby house, but made it as far as the tree where he passed out again.

Upon waking he saw his sister who lived in Missouri come toward him saying for him not to worry, help was on the way.  Then, she walked away toward the Hornsby house.

Several months later, word came that his sister died the day before the Indian attack.  She was buried on the day her image appeared to Wilbarger.

The hole about the size of a large silver dollar in Wilbarger’s scalp never healed.  He wore silk bandages to protect his head for the next eleven years.  He died at his home on April 11, 1844, after striking his head on a low beam in his cotton gin.

John Wesley Wilbarger, Josiah’s brother, is among the many tellers of this tale.  A Methodist minster and sometime surveyor with Josiah Wilbarger, John Wesley spent twenty years collecting accounts of Indian atrocities from sources he claimed were always reliable.  In 1889 he published Indian Depredation in Texas, a 672-page piece of Texana filled with 250 separate stories of attacks and counterattacks.

The book came out at a time when academics were beginning to tell a more balanced account of Indian culture and motives.  John Wesley Wilbarger, however, painted Indians as unredeemable savages. 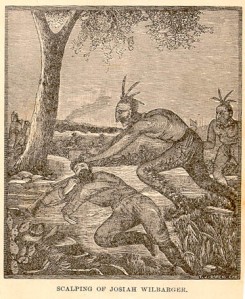 18 thoughts on “Scalped and Lived to Tell About It”