His supporters called him a visionary and a brilliant writer.  Some even dubbed him the “Prairie Voltaire” and the “American Carlyle.”  His detractors called him the “Devil’s Disciple.”  Even his biographer Charles Carver described him as “a mean Mark Twain.”  Upon his death, after a gun battle that also killed his assailant, those who hated him said, “At long last he’s in hell where he belongs.” 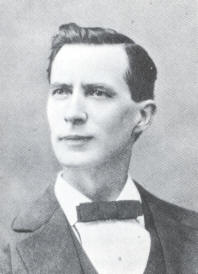 W.C. Brann acquired a third grade education, ran away at age thirteen in 1868 from the Illinois family who took him in after his mother’s death, and bounced around the country until he found work as a printer’s devil and cub reporter.  He wrote for the St. Louis Globe Democrat, Galveston Evening-Tribune, Austin Statesman, San Antonio Express, and Houston Post, soon gaining a reputation as a brilliant though vitriolic editorialist.

Brann and his wife had two daughters and a son.  After his thirteen-year-old daughter committed suicide in Houston in 1890, the family moved to Austin where Brann decided his editorial experience and the publication of three of his plays offered reason enough for him to use the limited family savings to begin publishing his “journal of personal protest,” the Iconoclast.  It quickly failed.

Brann sold the journal to William Sydney Porter, the Austin writer who later became famous as O. Henry.  After several more moves Brann ended up in Waco in 1894 as chief editorialist for the Waco Daily News.  The following year he acquired the journal from Porter and started publishing the Iconoclast.  This time the savagery of his writing coupled with the wisdom, wit and well-turned phrase gained attention across the U.S. and it many foreign countries, growing the circulation in three years to almost 100,000.

His articulate criticisms, even cruel comments fascinated his readers.  He raged against the status quo and insulted people and institutions he viewed as overly sanctimonious or hypocritical. He held Episcopalians and Baptist in equal disdain but his attacks on Baptists garnered even more sensation because he published the Iconoclast in Waco, home of Baylor University, Texas’ premiere Baptist institution.  He wrote that Baylor was “that great storm-center of misinformation.”  He is quoted in a local publication as saying, “I have nothing against Baptists.  I just believe they were not held under long enough.”

He wrote about a potential sex scandal involving the son-in-law of the president of Baylor University and he accused male faculty members of having sex with their female students saying Baylor was “a factory for the manufacture of ministers and magdalenes.”

Despite his screeds against fundamentalism and its preachers, he wrote very little about religion and did not attack theology.  In one essay he deplored the commercialization of Christmas.  In another he said, “Remember that God is everywhere—even in church.”  The subjects of his opinion pieces ranged from cats, to cows, to cold feet.  He called politics an “unsavory stew of Macbeth’s witches.”

Brann attacked wealthy eastern socialites such as the Vanderbilts, anything having to do with Great Britain and its people, the New York social scene, and women.  He reserved his most vicious remarks for African Americans, and after reading one of his essays it is hard to imagine his popularity even in a day when lynching was accepted in many communities.

Despite his many friends and supporters, the anger he stirred in Waco boiled over in October 1897 when a group of Baylor students kidnapped Brann and demanded he retract his statements about the university.  A few days later a Baptist judge and two other men beat Brann.  A year later a street fight between one of Brann’s supporters and two Baylor loyalists resulted in the supporter losing his arm and both men in the Baylor faction being killed.

Finally, on April 1, 1898, Tom E. Davis, father of a female Baylor student, shot Brann in the back on one of Waco’s downtown streets.  Despite having taken a bullet, Brann turned and began firing at his assailant, emptying his borrowed Colt Single Action Army Revolver into the body of Davis.  Davis, writhing in agony on the ground, continued firing until he emptied his gun.  Both men died the following day.

The word TRUTH is engraved on Brann’s monument in Waco’s Oakwood Cemetery.  Beneath the word is Brann’s profile with a bullet hole in it.