In the last half of the nineteenth century, the most powerful men in Texas called Galveston home.  The Strand, a street stretching five blocks along the docks, wore the moniker of Wall Street of the Southwest.  Two-dozen millionaires officed along the route, controlling Texas’ shipping, banks, insurance companies, and the vast cotton export business.

One man, by the power of his designs, left a heritage for Galveston and Texas that all the power brokers combined could not equal.  Nicholas J. Clayton (click on this link for terrific photos) arrived in Galveston in 1872, and changed the face of the booming cultural and business metropolis of Texas.  Although he arrived without friends or business contacts, his position as supervising architect for a Cincinnati firm constructing the First Presbyterian Church and the Tremont Hotel served as sufficient prestige to catch the eye of Galveston notables.

A faithful Catholic, who attended mass most every day, Clayton began his connection with Galveston’s movers and shakers by walking as soon as he arrived in the city to St. Mary’s Church (now St. Mary’s Cathedral) and discussing with the bishop improvements to Galveston’s oldest church built in 1846. Clayton soon designed the central tower and later a new bell and statue of Mary, Star of the Sea.

The bishop may have been influential in 1873 in Clayton receiving his first independent design of Saint Mary’s Church (now Saint Mary’s Cathedral) in Austin, which, at that time, was part of the Galveston Diocese. 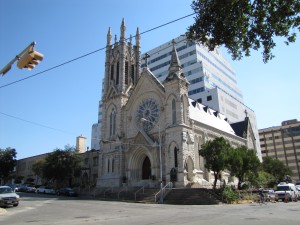 Clayton’s residential, commercial, and church designs won respect for the exuberance of shape, color, texture, and detail.  He loved his work, apparently sketched church buildings, windows, altars, and steeples, even while carrying on conversations.  He worked every day except Sunday and Christmas and expected near perfection from employees.  A gentle man, his family claimed his most abusive term was “muttonhead” for those who did not meet his standards.

He designed, built, added to, or remodeled eleven churches in Galveston and other churches all over Texas, Louisiana, Alabama, Florida, and Mexico.  In a time of slower communication, Clayton traveled extensively and made use of the telephone, telegraph, and letters.

Many of his designs have never been duplicated such as the intricate brickwork on Old Red (1891),

the first building for the University of Texas Medical Branch in Galveston; and the carpentry has never been matched in the Beach Hotel (1883-1898) and the Electric Pavilion (1881-1883) both destroyed in the 1900 storm.  The flamboyant octagonal Garten Verein (1876- ), an inspired work in wood, served as a social center for the German community.

Clayton, filled with enthusiasm, worked quickly and new ideas appeared to come easily.  Mrs. Clayton claimed the idea for the Garten Verein design came to Clayton instantly and he finished the plans in a single night.

His most spectacular residential design, the Walter Gresham House (1887-1892) (known today as Bishop’s Palace) rises three stories over a raised basement and boasts fourteen-foot ceilings.  Among the grand details is a forty-foot tall octagonal mahogany stairwell with stained glass on five sides lit by a large octagonal skylight.  Listed on the National Register of Historic Places, the Gresham House is one of the most significant Victorian residences in the U.S.

Despite his prolific production and vigorous work ethic, Clayton’s son acknowledged that his father wasn’t a very good businessman.  His insistence on perfection at times led him to go over budget for projects and to continue the work at his own expense.  He mostly left financial arrangements to others.  His concern centered on creating outstanding buildings. Eventually his relaxed business practices and dependence on a partner to follow through on a contract while Clayton was out of town, caused him to forfeit a bond and become involved in a long legal battle that resulted in bankruptcy.  As his legal battle dragged on for ten years, many clients turned their backs on him and refused to pay.  Devastated by the loss of his integrity and prestige, the final blow came when the 1900 storm severely damaged or destroyed many of his finest designs.

He continued to get small projects such as the design and reconstruction of the main building of St. Edward’s University in Austin after a fire damaged the structure, and he built the new Incarnate Word Academy in Houston, but he failed to get a bond for a large contract.

In November 1916, as he repaired a crack in his chimney, the candle he held caught his undershirt on fire.  Severely burned, he developed pneumonia and died on December 9, 1916.

Mrs. Clayton grieved to Rabbi Henry Cohen, one of their friends about having no money for a proper monument for her husband.  Rabbi Cohen replied, “Oh, you don’t need one, my dear Mary Lorena.  He’s got them all over town.  Just go around and read some cornerstones.”

Today, eight buildings of Nicholas J. Clayton design survive on the Strand, thirty-four remain, and eight-six have been razed.  His legacy continues in the beauty and style he brought to his beloved Galveston, known as Texas’ Victorian Oasis.

10 thoughts on “POWER BY DESIGN”