Known as the horseback “Cavalry of Christ” to Mexican ranchers along Texas’ lower Rio Grande Valley, the Oblate Fathers arrived in 1849 to serve as Texas missionaries.  The padres, young men from large cities in France, wore plain black soutanes resembling ankle-length, long-sleeved dresses with an Oblate cross hung around their necks.  Experiencing a steep learning curve mastering Spanish and English, the city boys faced the added challenge of horseback- and burro-riding over 100- to 150-mile circuits along dusty, mesquite-choked trails to ranches scattered along the Mexican border.

The U.S.-Mexican War ended the year before the Oblates arrived throwing the new arrivals into a tumultuous period of cattle rustling and general lawlessness, civil wars in the U.S. and Mexico, as well as disasters like yellow fever and periodic hurricanes. Despite the hardships, residents along both sides of the river loved their French padres, especially Father Pierre Yves Keralum, known to the Mexican people as Santo Padre Pedito for his humility, his obedience, and his kindness. He’s also remembered for the mystery surrounding his death.

Father Keralum an architect and master builder combined preaching, baptizing, and marrying people with designing and constructing Gothic Revival style churches all along the Rio Grande.  Assigned in 1854 to Roma, a new mission center covering a large area upriver about half way between Brownsville and Laredo,  Father Keralum completed the design and construction of Our Lady of Refuge Church.

When an Oblate superior drowned at sea after starting the design of the massive church at Brownsville, the Oblates called on Father Keralum who modified the plans and completed in 1859 Brownsville’s massive Immaculate Conception Church (designated a Cathedral, 1874) with its beautiful vaulted ceiling.  In 1960, fire and smoke damaged the Keralum designed hand-polished mesquite alter and pulpit and some of the chandeliers.  He also designed the nuns’ convent, priests’ house, and college building. 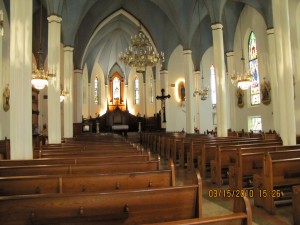 Along the Rio Grande many tiny chapels survive on former ranches and at midway mission stations where the Oblates stayed during their long circuit rides. One of the mission centers, La Lomita, sits on a ranch the Oblates inherited from René Guyard, a fellow Frenchman.  Located between Brownsville and Roma, the La Lomita mission served about sixty-five area ranches.  Today, the reconstructed chapel survives and the town of Mission, a citrus-growing center known as the “tourist mecca of South Texas”  occupies much of the original ranch. 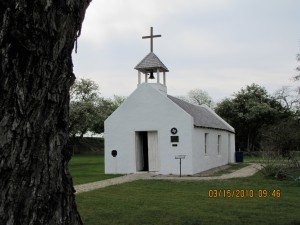 Overlooking San Agustín Plaza, where Laredo began in 1755, the cathedral of San Agustín was rebuilt in 1872 with Father Keralum probably assisting Diocesan priests with the construction.

After twenty years of traveling at least three times annually on horseback, visiting seventy to 120 widely scattered ranches along the Gulf coast and interior, Father Keralum at age fifty-five was frail and nearly blind.  On November 9, 1872, despite misgivings of his fellow Oblates, he mounted his horse and rode away from Brownsville.  He stopped about forty miles away at a ranch northwest of present Mercedes before he disappeared.  His horse was found contentedly grazing.  For a time people suspected murder.  Over ten years later in 1882, some cowhands found his remains identified by his Oblate belongings.  Perhaps he followed a cattle trail by mistake, became entangled in a thicket, and dismounted to rest.  Speculation suggests a rattlesnake bit him or he simply became lost and died of weariness and starvation.

His legacy survived in the lives of those he touched and in the handsome churches that dot the landscape of the Lower Rio Grande Valley.’

18 thoughts on “OBLATE FATHERS OF THE RIO GRANDE”